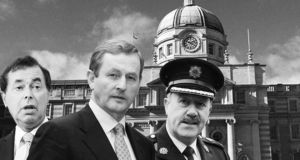 Taoiseach Enda Kenny did not sack or seek to sack former Garda commissioner Martin Callinan, an inquiry has found.

The report, which was published on Tuesday, said the immediate and direct cause of Mr Callinan’s decision to retire in March 2014 was a visit from the then secretary general at the Department of Justice Brian Purcell and the message he conveyed from Enda Kenny.

The Taoiseach said he accepted his decision to send Mr Purcell to the commissioner’s house on a Monday evening to discuss his handling of Garda phone recordings controversy was the “immediate catalyst” in Mr Callianan’s decision to retire the following day.

Mr Callinan’s retirement came after a series of Garda controversies including reports of the taping of phone calls at Garda stations and his criticism of Garda whistleblowers.

The visit to Mr Callinan’s house prompted allegations from the Opposition that Mr Kenny had sent Mr Purcell to effectively sack Mr Callinan.

Speaking on RTÉ News after the publication of the report Mr Kenny said the charge against him that he had sacked Mr Callinan had been clearly and unambiguously rejected by the inquiry report.

The Taoiseach also said he has full confidence in Attorney General Máire Whelan and insisted she was doing a superb job.

However, Sinn Féin deputy Aengus Ó Snodaigh said in Mr Kenny’s position on the findings was not credible and said the Taoiseach should consider his position.

Fianna Fáil leader Michéal Martin accused Mr Kenny of trying to spin the outcome of the report and said his party is considering tabling a motion of no confidence in the Taoiseach.

Mr Kenny said he had an extra difficulty in supporting the commissioner when he discovered decades of telephone calls in and out of Garda stations had been recorded.

Mr Kenny told Mr Fennelly that he was first made aware of recorded phone calls in Garda district headquarters, going back to the 1980s in some cases, on Sunday March 23rd, 2014.

The inquiry found that a letter had been sent by Mr Callinan to the Department of Justice alerting officials and the then minister for justice Alan Shatter to the issue two weeks earlier, but it was not acted on.

The Fennelly inquiry criticised Mr Callinan for not acting on that information sooner.

The Taoiseach said he did not know about this letter before arranging a meeting the following day with Ms Whelan and senior officials to decide how to deal with the taping issue.

Mr Kenny told Fennelly: “What is deeply regrettable – and very significant – was that neither I, nor any of the other participants in that meeting, were made aware of the existence of a formal letter from the then commissioner on the taping issue which had been sent to the Department of Justice.”

The Taoiseach said if he had known about it he would not have sent Mr Purcell to the commissioner’s house that night.

Mr Kenny said he would have produced the letter at Tuesday’s Cabinet meeting instead.

He added: “I was left in a position where a Cabinet meeting was about to take place, it was now clear that a commission of investigation would have to be proposed, the matter of recordings in Garda stations would become public and I made a decision that it was only fair and right to ensure that the then Garda commissioner was made aware of the situation and my grave concerns.”

In its conclusions the report finds Mr Kenny made the decision to send Mr Purcell to Mr Callinan’s home and that this visit to a commissioner’s home was without precedent.

The Taoiseach told the inquiry he had no intention of putting pressure on the commissioner to retire.

The secretary general at the Department of the Taoiseach Martin Fraser told the inquiry it did not escape him that one possible outcome of the visit by Mr Purcell was that the commissioner could retire.

The report also found Mr Purcell did not receive clear instructions on the detail of the message he was to convey to Mr Callinan from Mr Kenny.

The report said the then Garda commissioner’s interpretation of Mr Purcell’s message as an indication he should consider his position was “a reasonable conclusion for the commissioner to reach”.

It said the message delivered by Mr Purcell, in the circumstances where at the next day’s Cabinet meeting the Taoiseach might not be able to express confidence in him carried “the obvious implication that the Commissioner’s own postion was in question”.

However it added: “The commissioner decided to retire; he could have decided otherwise but he did not wish to become embroiled in legal or other conflict with the Government.”

In his report Mr Fennelly said he fully recognised the difficult position the commissioner was placed in.

It says the message delivered by Mr Purcell carried the obvious implication that the commissioner’s own position was in question.

The report said if the “circumstances are viewed objectively, the mission on which Mr Purcell was being sent was liable to be interpreted as suggesting to the commissioner that he should consider his position though it just be emphasised any actual decision would be for the commissioner himself to make”.

Mr Purcell told the inquiry he was shocked and concerned about what he was being asked to do.

With regard to the recording of telephone calls, the commission said Mr Shatter had no knowledge of the issues until March 24th, 2014.

It said had Mr Shatter been fully briefed the events of that evening – when Mr Purcell was dispatched to the home of Mr Callinan – matters would “not have unfolded in the way it did”.

The report found that Attorney General believed Mr Shatter had been fully informed and he was not.

The inquiry said the Attorney General did not seek to contact the minister or to discuss the controversy with him.

Mr Fennelly writes: “Although the Attorney was not under any duty to contact the Minister in these circumstances, it would have been both reasonable and prudent for her to have done so.”

Ms Whelan informed the Taoiseach on March 23rd and a meeting was called the next day. Mr Shatter was not invited to the meeting until after it had begun.

Mr Fennelly said the former minister was “uniquely placed to obtain experiences and clarifications from the Garda commissioner if required”. It added: “He was not asked to do this.”

Mr Shatter told the inquiry he was “firmly of the view that the commissioner was expected by the Taoiseach to consider his position”.

In a statement, Mr Shatter said he welcomed the unravelling of the conflicting accounts of what had happened and said it was in the public interest that lessons are learnt from mistakes made in this period.

1 Coronavirus: No new Covid-19 deaths reported in State for first time since March
2 Tributes paid to Ireland’s deputy ambassador to China who died on Sunday
3 Coronavirus: What will reopen in Ireland’s phases to ease restrictions and what are the dates?
4 Unconvincing account may take some heat out of Dominic Cummings controversy
5 Unidentified man has been in Irish psychiatric hospital for 30 years
Real news has value SUBSCRIBE