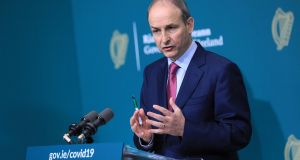 Taoiseach Micheál Martin has said it would be a “hugely retrograde step” if the Northern Ireland protocol was undermined after briefly becoming “collateral damage” in a European row over the rollout of Covid-19 vaccines.

He said the European Commission’s decision to signal it was willing to invoke article 16 of the Northern Ireland protocol was a mistake but he insisted no lasting damage had been done by the move.

On Friday, Brussels announced plans to use a section of the protocol, which allows for special safeguard measures to be taken by either the UK or EU in exceptional circumstances, to prevent a “backdoor” on its plan to limit shipments of AstraZeneca’s Covid-19 vaccine to Britain. The pharmaceutical company is locked in a bitter row with Europe over a vaccine supply shortfall.

Brussels subsequently reversed the move following condemnation from London, Dublin and Belfast. The commission warned however, that should vaccines and active substances move toward third countries and out of the bloc, it would use “all the instruments at its disposal”.

The commission revised its vaccine export control regulation on Saturday. The regulation compels pharmaceutical companies to report the quantity and destination of vaccine exports and hands member state governments the power to block them if the exports pose a threat to completion of EU orders.

It is understood the revised regulation includes a compromise that will see vaccines crossing between the Republic and Northern Ireland being recorded in Dublin but they will not be at risk of being blocked.

Speaking from his home in Cork, Mr Martin said he welcomed the manner of the response of the European Commission. “They listened to what we had to say and took stock of the situation and pulled back from what they had originally been proposing,” he said.

The Taoiseach said he had several conversations with commission president Ursula von der Leyen on Friday night and she took on board what he had said about the impact activating article 16 would have on North-South relations and Anglo-Irish relations and responded promptly.

Mr Martin rejected Northern Ireland First Minister Arlene Foster’s view the EU’s plan to activate article 16 was an act of hostility towards Northern Ireland. He said it should be seen in the context in the “very bitter row” between the EU and vaccine manufacturer AstraZeneca.

Ms Foster said the move was an “absolutely incredible act of hostility towards those of us in Northern Ireland”.

“It’s absolutely disgraceful, and I have to say the prime minister now needs to act very quickly to deal with the real trade flows that are being disrupted between Great Britain and Northern Ireland,” she told BBC Radio 4’s Today programme on Saturday morning.

The DUP leader reiterated calls for Mr Johnson to enact article 16 of the protocol over delays being faced by hauliers.

“We’ve been asking the PM to deal with the flow problems and indeed, since January 1st, we’ve been trying to manage along with the government the many, many difficulties that have arisen between Great Britain and Northern Ireland and there are actions he could take immediately,” she said.

“The protocol is unworkable, let’s be very clear about that, and we need to see it replaced because otherwise there is going to be real difficulties here in Northern Ireland.”

Pressed on whether that would be in breach of an international treaty, she said: “Well it didn’t seem to bother the European Union yesterday when they breached the treaty in terms of their embarrassment around their vaccine procurement.”

Mr Martin said while he could understand Ms Foster’s frustration the move “wasn’t in any way an act of hostility towards Northern Ireland but it seems to me people were blindsided in an exclusive focus on the row with AstraZeneca as to the negative implications for the operation of the protocol.

“From my perspective, the whole issue was a fallout from an increasingly tense and acrimonious row between AstraZeneca and the European Commission in respect of the contracts that had been entered for the supply of the vaccines.”

Mr Martin also rejected Ms Foster’s claim that the Northern Ireland protocol was unworkable and he said people should recognise the benefits it brings to businesses in the North before talking about scrapping it.

“In my view, it would be a hugely retrograde step for Northern Ireland if the protocol was undermined in any way and that’s why we moved so quickly last evening to ensure no damage was done.”

Mr Martin said that he had also spoken to Mr Johnson about the situation and they agreed on the importance of the Northern Ireland protocol in facilitating seamless economic activity on the island of Ireland.

Northern Ireland’s Health Minister Robin Swann said he had spoken with UK health secretary Matt Hancock to seek reassurance on vaccine supplies. “It’s essential confidence and trust is rebuilt after yesterday’s actions by the EU,” he tweeted. “We need certainty that essential vaccine supplies will always be able to travel freely to NI, both now and in the future.”

On Saturday evening Minister for Foreign Affairs tweeted that he had spoken with co-chair of the EU-UK Joint Committee Maroš Šefcovic, UK cabinet office minister Michael Gove and Secretary of State for Northern Ireland Bradon Lewis. He said the four agreed to focus on “protecting Ire/NI Protocol & to ensure that implementation works for everyone”.

Mr Coveney said the protocol is there to protect “relationships, facilitate trade, avoid borders” and they would continue to work on “outstanding issues”.

Mr Martin said he believed Ms von der Leyen’s decision to reverse the proposal once the Irish Government made its concerns known had ensured no damage was done to EU-UK relations.

“The tone of my discussions with president von der Leyen was reasonable and constructive but also firm, pointing out the issues and the implications, which the president took time to reflect and meeting with her own advisers.

“We had a number of discussions and I think the president understood very quickly – this should not have happened very clearly but there was a quick realization by the commission of the implications and it reversed its decision.”

Mr Martin said the Government had received no advance warning from the European Commission of its intention to activate article 16 and that would be something that would form part of future discussions with the commission.– Additional reporting: PA