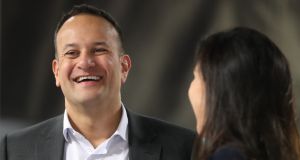 Taoiseach Leo Varadkar has said the public have sent a “clear message” by electing more Green Party candidates that they want the Government to do “more on climate action”.

Mr Varadkar said it had obviously been a good election for the Green Party: “I congratulate them”.

“It’s a very clear message from the public that they want us to do more on climate action. It will require lots of changes at individual level, community level and also at Government level in terms of policy.”

He said the Government were acting on climate but the statement from the public is “they want us to act faster”.

The Taoiseach was upbeat about Fine Gael’s expectations in his home county council of Fingal despite the Green surge, and his own electoral area.

“We’re taking two seats in Castleknock and the Greens are taking one on nearly 30 per cent. So a very good result for the Greens, no doubting that.”

“But we’ve two councillors and they’ve one, so that’s a good result.”

Mr Varadkar said Fine Gael had “won the popular vote” in the European elections by a considerable margin. “Our vote’s up in all three constituencies.”

He told reporters at the Citywest count centre that they definitely had all three European Parliament seats, possibly four and they were in the shout for a fifth.

No official results have yet been declared for any of the European seats.

Mr Varadkar acknowledged the local elections were more mixed for the party, adding “but I think overall we will increase our number of councillors, but that’s down to transfers and it’s too early to say”.

The party are unlikely to make the kind of gains locally they had hoped to, but if they were to see increases, they would be the first party in government to do so in 20 years.