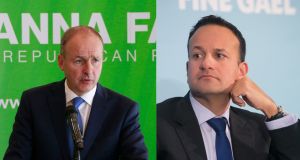 The first televised leaders’ debate between the Taoiseach Leo Varadkar and Fianna Fáil leader Micheál Martin will take place on Wednesday night on Virgin Media One.

Broadcaster Pat Kenny will be the moderator in the debate, which begins at 9.30pm and is happening earlier in the 2020 general election campaign than had been expected.

RTÉ television and Virgin Media will also host multi-party leaders’ debates in addition to the head-to-heads between Mr Varadkar and Mr Martin.

Virgin Media’s multi-party leaders’ debate will take place on Thursday, January 30th and will be hosted by Matt Cooper and Ivan Yates.

The State broadcaster has reiterated that it will not be including Sinn Féin president Mary Lou McDonald in the Prime Time leaders’ debate scheduled for February 4th.

Sinn Féin is consulting its lawyers and will write to RTÉ over its decision to only have Mr Varadkar and Mr Martin as participants in the Prime Time debate.

RTÉ said the first leaders’ debate on Monday, January 27th, on Claire Byrne Live would include leaders from a number of political parties.

Sinn Féin’s director of elections Pearse Doherty is to write to RTÉ management immediately asking the broadcaster to reconsider its decision.

Speaking on Sunday, Ms McDonald said “almost half of the electorate won’t vote for Fianna Fáil or Fine Gael in any circumstances”.

“It’s wrong for the national broadcaster to exclude so many voices,” she said. “It’s a bit of a farce to say that you can have a debate between two parties that are virtually identical in policy terms and a debate between two men who have been in government together for the last four years through the confidence-and-supply agreement.

“It’s not about me and it’s not even about Sinn Féin. You cannot decide that you attach greater weight to the vote of one section of the people and not the other. I was surprised at the extent to which people raised this issue with me.

“It’s unfair to exclude other voices. We are going to challenge it hard.”

He said it was “absolutely wrong” that they “won’t have an opportunity to debate and set forth our programme for Ireland so that people can make their decisions”.

He said the party would take legal advice if it did not get a satisfactory response.

Meanwhile, Mr Varadkar said his party is “playing catch up” going into the election, but that he hoped to convince the Irish people to stick with the party, saying it was a big decision.

An opinion poll in the Sunday Times showed the party was trailing Fianna Fáil by 12 points.

Mr Varadkar said he was not blaming anyone in Fine Gael for the party’s poor performance in the most recent opinion polls and cautioned against reading too much into a single poll.

“There will be plenty of opinion polls during the course of this campaign, and they’ll go up and down and they’ll narrow and they’ll widen. But I certainly am not dismissing the poll for a second,” he said on Monday. “We are playing catch-up in this election, and there is a real and serious risk that we could wake up on the ninth of February and find that we’ve a Fianna Fáil-led government.

“We all know that ends in tears. We all know every single time the Fianna Fáil gets into office – twice in my lifetime alone – within a few years, they wrecked the economy. And we know what that leads to – it leads to unemployment, it leads to forced emigration, it leads to people losing their homes. It leads to major cutbacks in investment in areas like health and housing, for example.”

Mr Varadkar said he was looking forward to demonstrating “some of the weaknesses that we’re seeing coming out of the Fianna Fáil policy statements” during the head-to-head debates with Mr Martin.