Election 2020: Politics on the menu in Donegal coffee shop 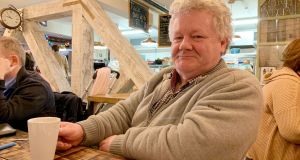 Mike Murphy and his colleagues have laptops, calculators and invoices strewn on the table in front of them. They run Moolicious Foods in Moville, just up the coast. Murphy would like to see better government support for rural businesses and for the fishing industry. Photograph: Freya McClements

Even on a weekday morning, Tank and Skinny’s coffee shop and home bakery in Muff, Co Donegal, is busy.

It opened in 2016, a few months after the last election; a popular meeting spot for a catch up with friends, a family treat or a business meeting, it has changed the landscape of the village.

“Whoever would have thought of a coffee shop in Muff? It’s a goldmine, so it is,” one punter remarks.

At the next table, Gregory Clarke is voting Fianna Fáil. 'For stabilit'

Yet among the breakfasts and pastries being served up when The Irish Times visits, there is also plenty of politics on the menu.

Mike Murphy and his colleagues have laptops, calculators and invoices strewn on the table in front of them. They run Moolicious Foods in Moville, just up the coast; Murphy would like to see better government support for rural businesses and for the fishing industry.

He namechecks two of the candidates, outgoing TDs Joe McHugh (Fine Gael) and Fianna Fáil’s Charlie McConalogue – “they’ve both been really supportive of us” – and explains his preference would be for a combination of their two parties.

“That would bring a level of stability to the country. If Sinn Féin get in, I think it will be all over the place. I’ve a feeling they’re more mavericks.”

Under Leo Varadkar, he says, “everyone felt the country was in a safe pair of hands.” So what happened? “Hospitals and housing brought Leo down,” his colleague chips in.

At the next table, Gregory Clarke is voting Fianna Fáil. “For stability.”

“I’m Fianna Fáil, always,” adds his wife Alison. “It’s a Fianna Fáil house. My family was part of it, when they were founded. Do you know the original Neil Blaney? she asks. “His meetings were held in my granny’s house in Buncrana way back.”

Gregory works in the public sector. “We’re always the hardest hit, with levies over the years, and nothing ever comes back to us. Fine Gael haven’t done enough to address it.”

He dismisses mention of the financial bailout. “We should be past that. Fine Gael have had their opportunity. They were given a chance.”

Sinn Féin, he thinks, will do well, and may end up in a coalition government. “People are looking for change but they don’t know what the change is that they’re looking for.”

“Ah I was fond of Leo, though I don’t think he did a great job,” chips in her friend Mary McGinnity.

“What we need are jobs, this is a fabulous place to bring up a family but you need to be able to live,” she says.

McGuinness is from Greencastle; among her neighbours is the Independent candidate Peter Casey. “He’s not a good talker in debates but he’s very pleasant if you meet him out,” says McGuinness. “In the presidential election he got all the local votes, but that won’t happen this time.”

Her fellow diners would seem to bear that out. “Who’s Peter Casey?” Joan Donnell asks.

She and her sister-in-law, Heather McLucas, are having a vegetarian breakfast in their “usual Tuesday haunt”. A Donegal woman who now lives over the Border in Derry, Donnell is not eligible to vote, but she explains that if she could she would vote for the Green Party candidate. “I’ve just become so much more aware of everything that’s happening with the environment and how we’re destroying it.”

Rory McLaughlin has moved the other way; he is a Derry man “exiled” to Donegal. “I haven’t decided yet,” he says. “I know they say all politics is local, but many of the issues highlighted are Dublin, Cork, Limerick centred – things like homelessness and rent prices.”

“Instead he cites broadband, roads and jobs. “There are loads of vacancies in Dublin or Cork, but here young people have to move away to get employment, and there’s the impact of that on communities.

“There’s an urban/rural divide in politics. I’d like to see more to encourage businesses – broadband connectivity is a big local issue. You try to use your mobile phone here in Muff and you have zero bars [of a signal] and you’re only two or three miles away from the fourth biggest city in Ireland. We’re not in the wilderness here.”

He acknowledges Sinn Féin have made a “massive turnaround” since the European and local elections last year, but admits “I don’t know what that represents. The big thing that’s stood out in Sinn Féin’s favour has been the pensions.

“I think it’s a reflection that people want change, and they associate Sinn Féin with change, because they haven’t been in power.”