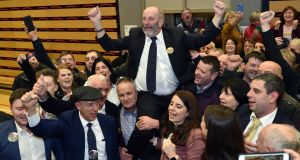 Danny Healy-Rae retained his seat in Kerry. He is pictured with his brother Michael, family and supporters at the Kerry count centre in Killarney. Photograph: Don MacMonagle

There has been a seismic shift, an historic breakthrough, a transformational change in this general election.

And, that’s just Danny Healy Rae’s belated acknowledgement of the need to look after the planet.

The Kerry TD has made known his scepticism of man-made climate change.

Ireland being “roasted out of it” in the 11th and 12th centuries, the night of the Big Wind in 1839 and a period in the 1740s “when there was rain for two years” were all evidence to the Kilgarvan publican of a hoax.

“God above is in charge of the weather and we here can’t do anything about it,” he told a Dáil debate.

In his latest outburst at the Kerry count centre he blasted: “To hell with the planet,” adding, “I make no apologies to anyone anywhere for that…”.

But by the next morning he was doing just that. “I apologise sincerely for the comments I made, and I withdraw that remark, because we must care for the planet..,” he accepted.

One wonders if a new political force could be born out of this schism in Ireland’s electoral landscape - The Michael Alliance?

Almost half of the Independent TDs elected by Monday evening share the popular given name. Indeed, there were 14 Michaels — or variants of the name — in the 32nd Dáil.

As the three big parties look around them for potential coalition partners, would such an alliance be taking the Michael?

Look away now if you want to guess the newly-elected Independents: Collins in Cork South West, Healy-Rae in Kerry, Fitzmaurice in Roscommon Galway and Lowry in Tipperary.

“We’re going to keep trying to strengthen the American family,” vowed US president George Bush Snr during the 1992 Republican National Convention. “To make them more like the Waltons and less like the Simpsons.”

“Ay caramba!” he might have exclaimed had he been at the count centre in Wexford, where the political family sounded more Springfield than rural Virginia.

Among the eliminated candidates were a Lisa (McDonald) and a Bart (Murphy). Lisa’s married name is Simpson. Her mother’s name is Marge. And for good measure, Lisa featured in the Wexford People a few weeks ago playing a saxophone.

It’s tough, they say, putting yourself before the electorate only to be rejected come polling day.

So spare a thought for Independent candidate Sean O’Leary who ran in 11 constituencies — and failed to get elected in any of them.

The laboratory technician and homelessness campaigner from Kerry Pike in Cork was aiming to get 1,000 votes in each constituency — including Dublin West where he was standing against Leo Varadkar.