Election 2020 out takes: Campaigner for Timmy Dooley has car stolen 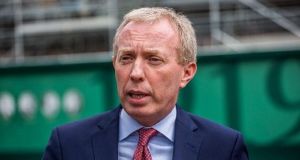 Timmy Dooley: ’Really upsetting’ his car was tailed for a while before the thieves struck

A campaigner for Fianna Fáil’s Timmy Dooley had his car stolen while canvassing votes.

Pat Hayes and Dooley were knocking on doors in Co Clare just 20 feet from Hayes’s Volkswagen Tiguan when thieves jumped into it and sped off.

Dooley is appealing for witnesses who saw the incident on Thursday night at Clooney, on the road between Ennis and Tulla, to contact gardaí.

It was “really upsetting” that the car was tailed for a while before the thieves struck, Dooley told the Clare Herald.

“It’s frightening to think that as you step out of your car someone is waiting to jump in and speed off in a rural area.”

Micheál Martin could take a lesson from one his party candidates on navigating a grand alliance.

Despite their differing political allegiances they are not worried about it leading to a vote split. O’Sullivan, from Clonakilty, said their coalition is rock solid. “We have a great relationship and I’m absolutely mad about her,” he told the Southern Star.

“She’ll make a fantastic candidate and I know that first hand. We get on well but we differ politically and I wish her the best of luck.”

Cairns, from Turkhead, west of Skibbereen, who had previously likened the situation to a “badly written rom com”, is also ready to put romance aside for a fair fight. “All’s fair in love and war,” she said.

Sinn Féin have made great hay over their enforced absence from the leaders’ TV debates, but why bother with the lamestream media when you can speak to the people directly?

A short video produced by the party and promoted to over 400,000 people on social media had all the trappings of a prime time magazine news programme (although listen and you’ll notice the intro music is a Wolfe Tones number that topped charts recently).

It wasn’t quite fake news, but the style of the programme, with Mary-Lou interrogated (softly) by a “journalist” raised eyebrows among those who monitor how parties advertise online. Sam Jeffers, who developed the Who Targets Me political advertising software said the ad was “close to the line because it’s trying to be something it’s not”, even though voters are unlikely to think it’s real news. Liz Carolan of the Transparent Referendum Initiative (TRI) said it doesn’t meet the threshold of deceptive online tactics “but some people who watch this might think it’s a genuine media interview”.

No replay of the siege of Kenagh

Spare a thought for the good people of Kenagh in Co Longford.

The small village by the Royal Canal was the setting for a tense recount in the Longford-Westmeath constituency at the 2016 general election. The stand-off over disputed votes between Fine Gael’s James Bannon and Labour’s Willie Penrose was dubbed the Siege of Kenagh.

But there will no such excitement this time around as the village has lost its coveted count centre role to Athlone.

Councillors have described the move as a “huge blow” to the handful of shops and pubs that fed and watered campaign teams, tallymen and journalists.

Pauric Connolly, who owns Mac’s Shack restaurant, told the Longford Leader: “For a village as small as Kenagh, every little bit helps throughout the year.

“The count created a bit of a buzz around the place, with the media out and everything. It is very disappointing.”

Is Fine Gael the Dermot Bannon of Irish politics - coming up with great plans that it can’t deliver within budget? – A question from Communicorp’s political correspondent Seán Defoe stings the Fine Gael front bench at the launch of its election manifesto

The number of women standing in the general election – just 30 per cent of the 531 candidates overall.

The Women for Election campaign described the figure as disappointing, noting “women aren’t a minority group, we are more than half the population”.