Taoiseach’s visit is latest in wave of politician invasions, but it wasn’t a complete washout 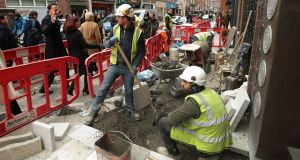 Moves are afoot to set up a support group for women traumatised by TDs marauding through beauty rooms and hair salons.

There has been a huge spike in reported cases of post-politician stress disorder (PPSD) since the beginning of the general election campaign. As the push for votes moves into the final two weeks, experts predict numbers presenting with PPSD will reach critical levels.

Women already in a weakened state because they are getting their hair done are considered most at risk. The authorities are dealing with a massive increase in calls as male politicians with nothing to lose (except their seats) are barging willy-nilly into premises with photographers in tow and embarrassing the clients.

“There was talk of reconvening the National Emergency Co-ordination Group in Government Buildings but we couldn’t get the Taoiseach or Eoghan Murphy to attend. We even tried to lure them inside by attaching a high-vis vest to the end of a stick and making them follow it, but it didn’t work. We approached other party leaders but the upshot was the same,” said a worried official.

The final proof that this carry-on has reached epidemic proportions came on Friday morning when the Taoiseach – who is normally more reserved than old hams, sorry, hands like Micheál Martin, Shane Ross and the Michaels Ring and Healy-Rae – barrelled straight into L’Ombré hair and beauty in Santry’s Omni Park shopping centre without batting an eyelid.

One, who was having her roots done, held up her Grazia magazine and tried to cover her head with it

He was followed by television cameras, reporters, photographers and the Fine Gael candidate in Dublin North-West, Noel Rock.

“Wow, this is exciting!” cried Noel, whose battle to save his seat has probably cost him a few more precious strands. “I’ve never been in a hair salon before.”

Now he has learned he can be as shameless and brazen as the best of them, Leo Varadkar listened earnestly to manager Marie Wall tell him about traffic problems for workers commuting to Dublin as if totally unaware of his surroundings.

But the women at the basins and the mirrors were very much aware of the situation. One, who was having her roots done, held up her Grazia magazine (“Unstoppable rise of the Love Island face”) and tried to cover her head with it.

And then there was Annette, with the Taoiseach standing beside her having the chat and the national media arrayed around them and her with her wet hair up, clipped into sections after the final rinse, ready for the cut. You could see her going red in the mirror. Mortified.

One of the staff tried to drape a gown over her face, but it didn’t really work. Then she took a colour chart and tried to balance it on the top of her head to hide her reflection. At this point, a photographer for one of the papers leaned in and asked her name.

Leo and his entourage left.

“I normally have make-up on and that, but because I’m going out tonight and I knew I was getting a colour so I didn’t put any on,” she told her stylist, who has been cutting her hair for over 20 years and who she has followed everywhere. If only politicians could engender the same loyalty that good hairdressers can command from clients.

Then they pondered the general election and both women came to the same conclusion. “I think I’m going to give him another go,” said one. “I’d be happy enough to do that too,” said the other.

Near the entrance (where he was booed by a number of people on his way in) the Taoiseach had a long conversation with Aisling Keating and Joan Plunkett in Specsavers. Having spoken to him at length, Aisling gently broke the news. “I’m sorry to say, but I’m a Micheál Martin supporter,” she confessed, placing a comforting hand on his arm. “But don’t worry, you’ll be grand.”

Noel Rock was working overtime, running around and introducing people to his VIP canvasser

Joan Plunkett also said she will be voting Fianna Fáil, although she was impressed by Leo.

“He wasn’t backing down at all on the pension thing. He said we couldn’t afford to bring the eligibility age back down and explained why the country can’t afford it. He’s the first politician not saying what people want to hear,” she said.

“I’m impressed. And he smells gorgeous.”

Overall, the Taoiseach got a very good reception from the polite shoppers and pensioners in the shopping centre to collect their payments. Noel Rock was working overtime, running around and introducing people to his VIP canvasser. “Ah Noel, he does love to get out,” smiled a constituent.

People kept telling Leo he looks better “in real life”. He said he must look terrible on TV.

“You’re much taller and slimmer in person,” observed a passerby. Leo was delighted. “People say I’m much smaller and fatter in person,” said Noel brightly.

Issues raised included housing (a hot topic with young and old alike) and the lack of primary school places for special needs children. Philomena Maughan said her son Lorcan is autistic and has health issues and she doubts he will ever get off the waiting list for a place. Lorcan needs therapy but “the appointments are becoming further and further apart . . . it went to a point I had to think of going private for him. I’m a single mother. I’m like, well, it’s backbreaking to try and struggle to get up the money to go private.”

The tourists were delighted to see him. The locals seemed only mildly interested, which was interesting

“And where are you approximately looking for a school place?”

Philomena, who grew up in Ballymun, said afterwards she would be voting for Sinn Féin’s Dessie Ellis. “From the time I was a kid, he’s been around and helping out.”

As he left the centre, the Taoiseach was berated by a woman angry over the housing crisis.

“You ought to be ashamed of yourself. The homeless here and everything else . . . the hospitals. You’re a disgrace, Leo. An absolute disgrace.”

He had one more canvass to do before the afternoon launch of Fine Gael’s election manifesto. The entourage, bulked out by a team from Young Fine Gael (Ibec Youth) for leafleting purposes, pitched up in Grafton Street for a short walkabout.

Somebody hailed him with a traditional Irish greeting when he arrived. “You’re a w***er, Leo!”

The tourists were delighted to see him. The locals seemed only mildly interested, which was interesting.

He made the traditional beeline for the flower sellers.

“I love sunflowers,” was his opener. “Ten euro,” said Gertie Humphrey. She also had some nice roses. “Roses are very Labour, though,” sniffed Leo, shaking his head. He flirted with the idea of a bunch of gerberas but stayed with the sunflowers.

“They’ll light up the day.” Which is more than could be said of the manifesto.

Two Chinese women were thrilled to meet the Taoiseach. He wished them a happy new year – what one is it. “The year of the mouse.”

Give us a bit of Come Out, Ye Black and Tans there, just for the crack and see what he does

Rass from Ghana shouted, “You’re doing a good job!” He lives in the UK, but his wife works as a business analyst in Dublin. “I’m going to get my wife to vote for him because he’s doing a good job. I like him. He’s a nice man. See the way he just took a selfie with me. Lots of people wouldn’t do that, and that’s how you judge a man, by how he connects with people.”

Busker Vincent Fottrell’s set was disrupted by the politicians, but he took it well. The photographers gathered near him and his open guitar case on the ground. A man complained that they were only interested in the politicians.

He turned to Vincent who was politely waiting for the politicians to pass.

“Give us a bit of Come Out, Ye Black and Tans there, just for the crack and see what he does . . . There’re coming down here to try and get some street cred, you know what I mean. Sing ‘get the f**k out, Fianna Fáil’ just for the crack.”

Vincent sang a lovely version of Back Home in Derry.

Josepha Madigan, the outgoing Minister for Arts, was talking to somebody in the crowd. “Start singing, Josepha!” shouted a photographer.

The Taoiseach came across to talk to Vincent.

“Do you mind being photographed? You’re allowed to say no.” Josepha jumped in for the photo. The two men had a few words. Leo took out his wallet, removed a tenner and put it in the guitar case. Nobody else did.

Into Clarendon Street and the group had to negotiate some major road works. He waved to a couple of workmen. They didn’t look too thrilled.

Next stop the manifesto, around the corner from Make Up For Ever.