Doubts over Trump visit rise as issue surfaces in US media 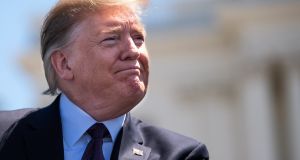 There is increasing concern this weekend that a potential visit by US president Donald Trump to Ireland may not go ahead, following media coverage of the issue in the United States.

Several media outlets, including the Washington Post, CNN and the New York Post have reported on the issue in recent days, highlighting the disagreement between US and Irish officials about the venue for a possible meeting between Taoiseach Leo Varadkar and Mr Trump.

A CNN article quoting an Irish Government source on Saturday said there was a “standoff” over the venue, which threatened to derail the visit.

The article quotes the source as saying: “The Irish government feel that protocol dictates that any event they host for President Trump should be at a venue of their choosing and certainly not at an hotel owned by Trump.”

It also reports the Taoiseach’s comments this week when asked about potential protests. Mr Varadkar said that, in a democracy, protest “is allowed and is welcome”.

In response to the CNN article, a spokeswoman for the Irish embassy said: “Contrary to what has been reported, there is no standoff about the venue for a meeting between President Trump and Taoiseach Leo Varadkar. There has been some preliminary discussions on venues.

“Having met him twice in the White House, the Taoiseach would welcome an opportunity to meet President Trump should he decide to visit Ireland while he is in Europe next month.”

The White House has not yet announced if a visit by the president will take place next month, though preliminary preparations have been underway for a number of weeks.

Disagreement about a proposed venue for a meeting between Mr Trump and Mr Varadkar has delayed a decision by the White House in recent days.

In the latest update to media, members of the press corps planning on travelling to cover the trip have been informed of a trip to Britain and Normandy, but not to Ireland. However, sources said that this could still change and a visit to Ireland could be added.

The unique nature of a potential visit – a US president visiting his own private property in Ireland – has thrown up complex issues around protocol, in particular if the visit constitutes a private or official visit.

While a trip to Scotland would not involve the president engaging in official activities given that he will have already met the British prime minister and Queen Elizabeth during his state visit to Britain, a visit to Ireland would necessitate some formal engagement with the Government.

The US president said in March that he planned to visit Ireland this year, mentioning in particular his golf course in Doonbeg.

“I will be coming at some point this year,” he said alongside Mr Varadkar in the Oval Office in March during the St Patrick’s Day celebrations.

“I missed it last year, and I would have loved to have been there. It’s a special place and I have a very warm spot for Doonbeg, I will tell you that. It is just a great place.”

Mr Trump had been scheduled to visit Ireland last November after the armistice centenary commemorations but the trip was ultimately postponed.

He has not visited his Doonbeg golf club since his election as US president, though his son Eric Trump stayed there in 2017.

British prime minister Theresa May extended the invitation for a full state visit to Mr Trump shortly after his election. He is only the third US president, after Barack Obama and George W Bush, to have been invited to Britain for a full state visit. His engagements while in Britain are expected to include a state dinner at Buckingham palace. An invitation to address parliament has not been extended however.

Mr Trump last visited Ireland in 2014 when he was welcomed warmly by then minister for finance Michael Noonan among others.

Both Mr Varadkar and his predecessor Enda Kenny invited Mr Trump to visit Ireland when they met the US president as part of the annual St Patrick’s Day celebrations in the White House.