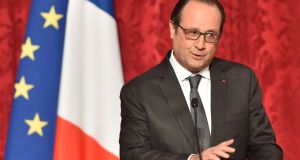 French president Francois Hollande during a decorations awarding ceremony in Paris to personalities committed to the fight against global warming. Photograph: AFP Photo

Efforts to reach a historic global agreement on climate change entered a critical stage last night as it became clear a new text has not overcome major fault lines over global warming.

With a little over 24 hours to go before the deadline set by the French presidency for COP21 to conclude, deep divisions over three major issues remained far from being reconciled.

The new cleaner text was published yesterday afternoon and had been reduced from 43 pages to 29 pages. For the first time the text gave two (and occasionally three) explicit options on key issues.

Mr Fabius said a further new draft would be published this afternoon. “It will be as close as possible to what the agreement would be on Friday. It’s not the final text but an additional step forward.”

Other delegates spoke of the lack of balance in the text with the G77 group led by South Africa criticising the provisions over adaptation and loss and damage.

Crucially, there was strong support for the view that the French draft text provided the basis for an agreement.

The talks received another impetus when US secretary of state John Kerry announced it would be doubling its funding to climate-vulnerable countries to $5 billion a year.

“We are prepared to do our part and we will not leave the most vulnerable nations among us to, quite literally, weather the storm alone,” he said.

Minister for the Environment Alan Kelly expressed cautious optimism at Le Bourget last night. “Unlike Copenhagen there is not a wide range of issues that need to be resolved . . . It is likely to go through the night. By Thursday we will know the shape of the agreement.”