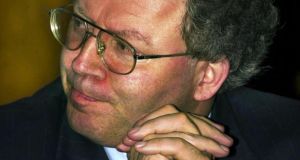 David Donoghue, Ireland’s ambassador to the UN: ‘At the moment, our stock is very high.’ Photograph: Eric Luke

A series of events has been organised this year to mark the 60th anniversary of Ireland’s membership of the United Nations, yet the agreement of the sustainable development goals (SDGs) at the weekend’s UN general assembly is the most fitting celebration. While there will be debate about the effectiveness of the goals and pressure to ensure promises are kept, Ireland’s role as co-facilitator of the intergovernmental talks that led to the agreement deserves praise.

It was no easy feat to get 193 countries with different views on varied topics – from resourcing the goals to interpretations of human rights – to commit to complex and broad statements. Over the past few days, the general assembly in New York saw 193 world leaders commit to the 17 SDGs, designed to end extreme poverty, fight inequality and injustice and combat climate change by 2030.

The global goals replace the millennium development goals and Ireland has taken plaudits for its work as co-facilitator with Kenya. The stakes were high, as were expectations of Ireland’s diplomats. As part of the UN60 celebrations in Ireland, UN secretary general Ban Ki-moon visited Dublin in May.

The trip included talks with Taoiseach Enda Kenny and a large part of the discussions between the pair centred on Ireland’s role as co-facilitators of the negotiations that led to this weekend’s ratification of the SDGs. Ireland’s ambassador to the UN, David Donoghue, is entitled to feel satisfied with job well done.

Donoghue was appointed to the co-facilitator role in October 2014 and built on work carried out by his predecessor Anne Anderson, now Ireland’s ambassador to the United States. Speaking over the weekend, Donoghue said there was a view that Ireland was given the task because it could “handle that type of job well”.

“You could analyse it as Ireland as a former colony itself had a similar experience to many African countries and that maybe a view was taken that we are more sensitive to the needs of developing countries.”

Donoghue said that Ireland’s “highly respected” aid programme may also have been factor in assigning it the facilitation role with Kenya, one of the biggest tasks in the UN in recent years and a huge responsibility. It took up most of Donoghue’s time over the past eight months, including significant effort from his staff. He said a key factor in securing agreement was Ireland and Kenya keeping control of the talks, and producing successive drafts of the final documents that were adopted at the general assembly.

The success in agreeing the goals – with President Michael D Higgins and the Taoiseach praising the work done to achieve agreement – means Ireland’s reputation at the UN has been enhanced.

“At the moment, our stock is very high,” as Donoghue put it. It will help in one of the next tasks facing Ireland’s diplomats at the UN: winning election to the security council, the heart of decision-making at the organisation, for the 2021-2022 term.

The 10 elected members of the security council hold staggered two-year terms and elections take place every year to choose five new temporary members. For 2021-2022, Ireland is hoping to secure one of the two positions available in the “western European and others” group and Norway and San Marino are the only declared competitors to date. The contest will take place in 2020. While the campaign is already under way, intensive lobbying will begin only two to three years in advance of the election.

The effort will be led by the Irish mission to the UN in New York and supported by staff in Geneva. Each of the 193 member states of the UN will have to be lobbied and Ireland will hope its efforts in securing agreement on the SDGs will be remembered when its diplomats and Ministers are canvassing for support. Ireland has twice served on the security council, during the periods of 1981-1982 and 2001-2002, and a three-year term on the Human Rights Council comes to an end this year.

The Department of Foreign Affairs has said its campaign for 2021-2022 will draw on the roles Ireland has played in the Organisation for Security and Co-operation in Europe and the European Union, as well as its strong record as a UN member. The work of Ireland’s diplomats on the SDGs will strengthen that record. Fiach Kelly is Political Correspondent