Miriam Lord: Water charges slosh around in a tale of excess and abuse that won’t wash 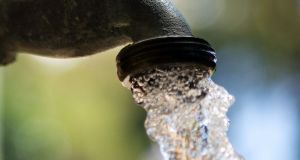 Fianna Fáil, Sinn Féin, AAA/PBP and a number of Independents voted for an immediate crackdown on water abuse. Water is the victim here. Photograph: Ian Waldie/Bloomberg

Nothing succeeds like excess. Excessive use of water is grand. But wilful waste is a different kettle of contaminated sludge. There will be “penalties” for “abusive use” of water.

This is where we were at on Wednesday evening with the madcap members of the Oireachtas Water Torture Committee.

Fighting over abusive versus excessive when it comes to turning on the taps. The anti-abuse and the pro-excess camps going hammer and tongs at each other over the meaning of words. By the time they finally finished their deliberations, recriminations were already happening on the plinth with spokespeople for all the parties concerned claiming vindication, justification, frustration, irritation, mystification, exasperation and, in the case of Socialist Paul Murphy and Sinn Féin’s Eoin O’Broin, a big win. The mind boggles.

Abusive use of water? Think children who fill up a balloon and balance it above a door in the hope it bursts over the head of the next person to enter.

Or maybe Super Soakers. Men who are not athletes wearing skimpy swimming togs of the variety commonly referred to as “budgie smugglers”.

Stewed tea. Tea made with water gone off the boil. Too much washing. Too little washing. Rain. Not to mention sloshing the stuff into a glass of 20-year-old malt. That’s highly abusive, according to some.

As for those nasty rumours about what Donald Trump allegedly got up to in a Moscow hotel room with unidentified ladies on the bed Obama once slept in? Abusive use of water there too, it’s been claimed.

Anyway, on Wednesday, a majority of members on the Oireachtas Water Torture Committee took a principled stand against the abuse of water. Water, they have consistently argued, is a human right. However, after many, many high-pressure meetings and brainstorming sessions, they hit upon the most astonishing discovery yesterday. Water has human rights too.

Fianna Fáil, Sinn Féin, AAA/PBP and a number of Independents, recognising what they believe to be one of the greatest human rights issues of our time, voted for an immediate crackdown on water abuse. Water is the victim here.

FF and SF – they cherish free water but are battling it out to see which of them cherishes it the most – spent the day insisting that abusive use of water is not the same as excessive use. Furthermore, they don’t believe in fines, charges or levies for depraved water abusers. But they can live with penalties.

Fianna Fáil and Labour also want to stop water abuse. But they favour the imposition of fines or charges for people who can get a big turn-on from turning on taps. That’s excessive behaviour, in their book.

No, it’s abusive, argue the other crowd.

Although the pro-excess and anti-abuse sides seem to have taken a lead from the Repeal the Eighth Amendment campaign. Both camps want a system which is Free, Safe and Legal. (Or mainly free, in the Government’s case.) The committee spent the day fighting over the best way to do this.

The whole carry-on is daft. Rumours of walkouts by Fine Gael kept surfacing throughout the afternoon. Spin and counter-spin the order of the day from the two main parties. Last week, it seemed Fianna Fáil and Fine Gael were agreed on what approach to take to the issue of water charges, which has risen to the top of the political agenda again while more pressing national matters might be more worthy of our politicians’ time.

Don’t forget, one party (FF) is giving minority support to the other (FG), thus shoring up the Government. They have what is called a confidence-and-supply agreement. If it falls apart, so does the Government and it’s election time again.

Part of the agreement requires the Fine Gael administration to implement whatever decision is reached by the Water Torture Committee. As of last night, the party was refusing to support the committee’s majority decision to muddy the question of charging for usage and abuse. It’s illegal, say the government team. It won’t wash with the EU.

So Fianna Fáil and Sinn Féin and the rest sent off their report for a legal opinion. They got the green light to sign off on it. The legal stuff, argued their brief, can be sorted out by the relevant Minister – Simon Coveney – through legislation. Whereupon Fine Gael turned its nose up at this legal advice.

Sure it isn’t proper advice at all, they sulked. Then a war of words between the two main parties erupted on social media. Duelling press releases were unleashed by FF and FG, both blaming the other for not honouring whatever agreement they thought they had with each other over water charges.

Sinn Féin and the others must have been delighted by the unseemliness of it all. Nothing like a mature approach to governing. Simon Coveney and Barry Cowen conducted their own personal war on Twitter, each accusing the other of reneging on last week’s deal.

Ironically, it was a tweet from Coveney which led to the downfall of Cowen’s brother, former FF taoiseach Brian. How will the Government bring forward legislation based on a report it has rejected? But it’s great to see the confidence-and-supply agreement holding up so well. Great to see mature politics in action.

“A shambles,” declared Labour’s Jan O’Sullivan. Now what? It has to be an inquiry. After the wilful waste and woeful want. The water abuse tribunal.