‘These things happen... there are plenty of old drains it could have come out of’ 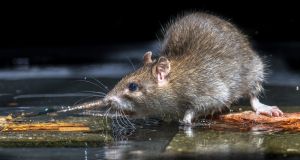 The rat pictured is not the actual Leinster House rat, which remains at large. Photograph: iStock

The Oireachtas members’ bar has been closed after a rat was seen entering the premises.

The rat was spotted by Fianna Fáil leader Micheál Martin, who was in the Dáil bar at the time.

Mr Martin is said to have seen the rat along the floor while having a cup of tea with Fianna Fáil Roscommon TD Eugene Murphy, and then informed staff of the discovery of what was described by well-placed sources as a “big, fat fella”.

It was assumed the rat entered the bar through a hole in the floor but, despite an extensive search, was not found.

The Leinster House rat remains at large and the bar remained closed as staff tried to locate the rodent.

An Oireachtas spokeswoman said the bar should re-open on Wednesday and insisted staff had the situation under control.

“Leinster House is an an old Georgian building, so these things happen,” the spokeswoman said.

“Refurbishment and building works are being carried out, so it is not surprising that a rat would get into the building as there are plenty of old drains it could have come out of.”

The 274-year-old Kildare Street building, built in 1745 as the home of the Duke of Leinster, has been undergoing major refurbishments for more than a year.

A 2006 survey of the building found Leinster House was a fire trap and the floors were sagging, creating a fire hazard in the space between them and the ceilings.

L’Arche sex abuse: ‘We didn’t know he had a darker side’ 00:32
Preparations under way for St Patrick’s Day programme in Washington 00:10
Spread of coronavirus triggers European travel curbs 00:02
Why Sinn Féin will not call the State by its name 00:02
Court to deliver judgment on Graham Dwyer’s phone data 00:01