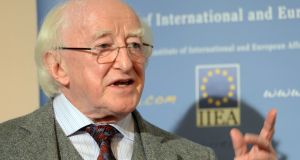 President Michael D Higgins said democracy was “made fragile”, most often unintentionally, whenever decisions that were the legitimate object of political debate were abandoned to the automaticity of rigid fiscal rules. File photograph: Eric Luke/The Irish Times

The challenges being faced by the European Union may also present a “generational opportunity” to rekindle the European vision, President Michael D Higgins has said.

The European project has arrived at “a moment of deep uncertainty”, he said, in a speech to the Irish Association of Contemporary European Studies in Dublin.

A monument to co-operation between peoples was facing many threats both internal and external, he said. He did not mention the pending UK referendum on leaving the EU.

Mr Higgins also said the way the union was treating the refugee and migrant issue could stretch European law to “breaking point”.

He quoted the President of the European Commission Jean-Claude Juncker who has said there is a serious risk that 2016 might see the “beginning of the end” for the European project.

Mr Higgins cited the issues of migrants and refugees, youth unemployment, the attacks on Paris and Brussels, and an “upsurge of xenophobic populism throughout Europe, as well as political strategies that put at risk genuine democratic pluralism in several member states”, as among the challenges facing the European Union.

He said the combined effect of the difficulties facing Europe “are deeply corrosive of our citizens’ confidence in both their national and European institutions. Alarmingly, those various crises only fuel and amplify one another.”

The causes of the crisis facing European democracy include “a political backlash to the instability that has resulted from years of economic and financial deregulation at national, European and global level, and to what is perceived on the European street as an exclusion from debate, discourse, decision-making, and instrumental administration.”

He said democracy was “made fragile”, most often unintentionally, whenever decisions that were the legitimate object of political debate were abandoned to the automaticity of rigid fiscal rules.

“That automaticity of fiscal rules is based on the assumption that there is but one path to economic soundness,” he said. Weaknesses in our economic thinking were not unrelated to our present political predicament.

Mr Higgins said the challenges that exist must be confronted with courage and hope, and said a key issue would be that of solidarity, both within Europe and with the outside world.

“Why did the member states of one of the globe’s richest and most powerful entities, a union of 508 million citizens, feel so threatened by the arrival of 1.5 million refugees and migrants last year?”

He said it was revelatory of a certain perception of ourselves as Europeans, one that is predicated on fear, and reflected a sense of helplessness.

The agreement struck last month by Turkish prime minister Ahmet Davutoglu and EU leaders was an important effort at countering the exploitation of migrants and refugees by ruthless smugglers.

However, Mr Higgins asked, can such an agreement fully and effectively respect the human rights obligations which provide the foundation for European legal order?

“I strongly believe that we should be wary of bending European and international human rights legislation to breaking point.”

He said the contravention of core principles might be politically convenient in the short term, but such breaches would only jeopardise the survival of our European Union in the long term.

“I profoundly believe that there is no going back to cultural isolation and homogeneity, lest our ambition is to transform the European Union into a giant private community.”

Europe has arrived at a critical juncture in the history of its project. It is at a moment when a new departure is required, Mr Higgins said.

“ We can, together, breathe new life in the European vision, and in doing so, we will also be saving a model on which the peoples of other continents have placed their gaze and considered exemplary for their own future co-operation.”