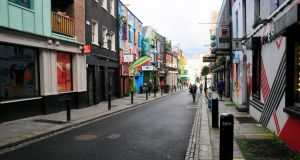 The dilemma of trying to find a balance between protecting lives and protecting livelihoods explains why Government Ministers spent many hours at the weekend weighing up what level of restrictions to move to.

Minister for Higher Education Simon Harris was unequivocal on Sunday when he said the Government would decide on further nationwide restrictions on Monday when it meets to consider how to try to suppress a virus that is “at such a level within all our communities”.

An end to outdoor gatherings or dining for up to 15 – permitted under Level 4 – is likely to be required to reduce public contacts but the Government may not want to go to Level 5 with all the closures and heavy economic cost that comes with it.

Harris spoke on RTÉ’s The Week in Politics on Sunday about trying to find “that landing spot” while avoiding doing things “in a piecemeal fashion” when more radical action is required.

The cost, both to the economy and wider society, will feature prominently on Monday when the Cabinet meets to decide what course of action to take.

State health officials believe a six-week lockdown is required in order to assess whether the new restrictions are working and to protect the health system before heading into the traditionally busy winter period for the country’s hospitals in December.

The Government may take a different view, choosing a shorter period instead.

Some around the Cabinet table, most notably Tánaiste and Minister for Enterprise Leo Varadkar, believe a strategy is needed on how to exit a lockdown before agreeing to go into one.

Six weeks on Level 4 would cost an estimated €1 billion in support costs (on top of the €21.5 billion deficit already left by the pandemic). This amounts to €414 million more than under the current restrictions. Four weeks would cost about €800 million, or €276 million more.

The additional cost of pandemic unemployment payment from putting an estimated 115,000 more people out of work under Level 4 closures amounts to about €39 million per week, based on analysis for the Department of Public Expenditure and Reform for last week’s budget.

This is on top of €61 million currently being paid out in such payments to almost 229,000 people.

Then there is the new Covid Restrictions Support Scheme, which provides businesses that are forced to close with weekly grants of up to €5,000 each. This currently costs the State €40 million per week under Level 3, which would rise to €70 million under Level 4 restrictions.

Level 5 restrictions, it is estimated, would put another 167,000 people out of work, adding €47 million a week to pandemic unemployment payment costs, and would cost the State more than €1.2 billion overall in supports under a six-week lockdown.

The much wider economic cost might be reduced as the Government is working on revised definitions of what constitutes an essential worker so, for example, some of the 150,000 people directly employed in construction could continue working under Level 5 restrictions to avoid a repeat of the March-May lockdown when the whole sector was shut down.

This, among other things, is still subject to debate within Government as it tries to find the right balance in this next phase of the fight against the virus.