Experts are concerned about travel due to new, more transmissible variants of virus 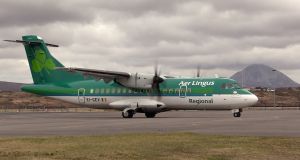 International travel from Ireland may not be possible this summer or by Christmas due to Covid-19, Tánaiste Leo Varadkar has indicated.

The Government on Tuesday extended the Level 5 lockdown measures until March 5th and announced additional restrictions on international travel.

Public health experts have been concerned about travel due to the new variants of the virus, particularly the British variant that is more transmissible and accounts for two-thirds of cases in the Republic.

Speaking at a Government press briefing on Tuesday evening, Mr Varadkar said international travel may not return this year.

“Maybe it will be the case that international travel is not possible this summer, this Christmas. I don’t want to close off that possibility today, but maybe we’ll have to,” he said.

On Tuesday, new restrictions were approved to clamp down on non-essential travel in and out of the State in a bid to decrease the number of new cases being imported from abroad.

Mr Varadkar said the quarantine locations would probably be hotels close to the airport.

Irish passengers arriving from other countries will now be required by law to quarantine at home for 14 days. Previously, while arrivals into the country were advised to self-isolate, it had no legal basis.

However, these passengers can avoid the 14-day obligation if they receive a negative PCR test after five days.

There are also new fines for those travelling outside the 5km zone around their home without a valid reason. The fine of €100 will increase to €500 for those who have flagrantly breached the rule.

The Tánaiste said it was innately unfair that a person who ventured 1km outside the limit was fined a similar amount to somebody who travelled abroad on a ski or sun holiday.

Around the Border, gardaí are to set up checkpoints in a 5km buffer zone. Minister for Transport Eamon Ryan said on Tuesday they would have the power to turn people back.

Taoiseach Micheál Martin said the message to people for the next six weeks is “very simple”.

“Stay at home. Do not travel. Do not make any journeys outside of your 5km unless you absolutely have to. Hold firm and stick to the basics,” he said.

On Tuesday, the number of deaths of Covid-19 patients in the State passed the 3,000 mark, as another 90 fatalities were reported.