Covid-19: 47 more deaths confirmed as Nphet says 25% of cases are not fully investigated 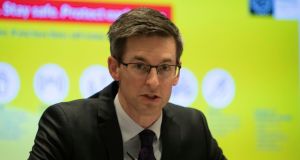 Almost one-quarter of Covid-19 cases are not being fully investigated to find the source of transmission, according to public health officials.

Defending Nphet’s general approach against charges of overconservatism, Dr Glynn also told the briefing there was a “false narrative” that the team hadn’t considered antigen testing and that it was “against” taking vitamin D as a counter-Covid measure.

Officials have been looking at the merits of antigen testing since last August, he said, and the HSE had done extensive work validating commercial kits.

It had found many of the claims manufacturers made about their products failed to stand up, he said.

Dr Glynn said he recommended people use vitamin D as a “general, positive thing” but the evidence of its effectiveness against the virus was not robust.

On the subject of schools, Dr Glynn said Nphet wanted to see a phased, cautious, slow return to the classroom, with time left between phases so the impact of the returns can be assessed.

He urged people not to take the planned partial reopening of schools as a signal that mobility or inter-household mingling was once again acceptable.

The Covid-19 reproduction number, a measure of how many other people a positive case infects, has drifted upwards to 0.65-0.85, according to Prof Philip Nolan, chair of the Nphet epidemiological modelling advisory group.

Prof Nolan said further progress is being made in reducing infections but the rate of progress has slowed down.

This is “almost certainly” due to the B117 variant that was first identified late last year in the UK and now accounts for 90 per cent of Irish cases.

Test positivity has stalled at about 6 per cent for the past 10 days, higher than during the October surge, he said,

“People are trying as hard as they can, they’re succeeding but collectively finding it more difficult,” he said.

Describing the situation as precarious, he urged people to resist the urge to mix more. Disease levels were still very high and had to be brought down further, he said.

Prof Nolan said the fall in infections among healthcare workers and over-85s are unlikely to be the result of vaccination at this stage and it would be “some time” before this impact can be assessed. Most over-85s have yet to get the vaccine, he pointed out.

The focus must be on the core priorities of education, childcare and the resumption of health services, Dr Glynn said. “Beyond that, we have to wait and assess the impact of easing in those sectors.”

He said officials were “fully cognisant” of the impact lockdown was having but given the strain the health service and contact tracing operations were under, and the high level of community transmission, a cautious approach was required.

Also on Thursday, the deaths of a further 47 people from Covid-19 and 901 more infections were confirmed.

Some 44 of the latest deaths occurred in February, two occurred in January and one in December.

The median age of the new cases is 36 years old and 65 per cent are under 45 years of age.

On Thursday afternoon, 771 Covid-19 patients were hospitalised, down 60 on the previous day. This included 151 patients in ICU, down three. There were 48 additional hospitalisations in the previous 24 hours.

The 14-day incidence of the disease now stands at 253 cases per 100,000 people nationally. Monaghan has the highest county incidence, followed by Offaly and Dublin.

The figures came as Ministers met to agree a plan for the reopening of schools. The Cabinet Covid-19 committee began its meeting at about 5pm.

The National Immunisation Advisory Committee (Niac) had been due to advise Minister for Health Stephen Donnelly on the results of its review of who should be prioritised to receive the Covid-19 vaccine. The review will first go to Dr Glynn, who will then advise Mr Donnelly of the outcome of the review.

Full Cabinet approval will likely be needed before any decisions are made in this regard.

Taoiseach Micheál Martin has said the Government is of the view that people who are immunosuppressed or have conditions like Parkinson’s or cystic fibrosis should be prioritised because if they were to contract the disease, they would be at greater risk.

The Government will next week announce a new version of the plan for Living with Covid-19 that will look at the path to easing restrictions in the future, although it is understood no dates will be set.

The plan will incorporate estimated schedules for vaccination and could look at what restrictions could be eased in tandem with this.

Level 5 restrictions are to be extended for at least another four weeks.

Earlier, Tánaiste Leo Varadkar had said it would be irresponsible to use the words “certainty” and “guarantee” in relation to school reopening dates and that was why Nphet’s informal advice to Government was for a phased reopening of schools.

He was responding to Labour leader Alan Kelly, who hit out at Government Ministers “kite flying” about dates for schools to reopen.

This could “torpedo” plans for the phased reopening from March 1st unless it had been “Tony Holohan- and Nphet-proofed”, Mr Kelly said.

Mr Kelly said students, parents and teachers were looking for clarity on school reopening but already this year there had been three announcements about school reopening that had had to be withdrawn – on January 7th, 26th and earlier this week before the Cabinet met.

The Tipperary TD called on the Tánaiste to guarantee that once a decision was made by the Cabinet Covid subcommittee that there would be no changes.

Mr Varadkar said it would not be “responsible for me to use the words ‘certainty’ and ‘guarantee’”.

He said Covid-19 case numbers were going down but are still quite high at 500-700 per day. “Schools were fully open at those levels back in September and October but we now have the B117 variant, which is much more transmissible.

“We just can’t say for sure what impact it will have as schools reopen on a phased basis throughout March and April.”