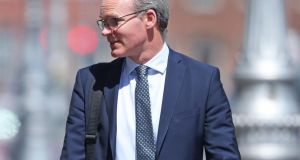 Minister for Defence Simon Coveney: does not expect the Air Corps to have full responsibility for search-and-rescue services in any future contract. Photograph: PA Wire

Minister for Defence Simon Coveney does not expect the Air Corps to have full responsibility for search-and-rescue services (SAR) in any future contract but wants it to be “as involved as it possibly can be”.

A 10-year contract with civilian helicopter operator CHC Ireland DAC to finish in July 2022 has been extended for an extra year to allow for a protracted procurement process for the next contract.

Mr Coveney said an assessment and preliminary appraisal by a steering group established to prepare that new contract for search-and-rescue services “ruled out” the possibility of the State assuming full responsibility for the service either through the Air Corps or an Irish Coast Guard aviation branch.

He agreed with the appraisal and said “I do not see the Air Corps taking full responsibility for SAR services in Ireland’s search and rescue domain.

“However, I would like to explore further the option of the Air Corps providing some element of the SAR aviation service, given its historical role in this area.”

The Air Corps previously had responsibility.

Mr Coveney said he would like to see a “ carve-out” of the service that would allow the Air Corps “to do an awful lot more than it does today” and to invest in training and equipment.

His interest “is to ensure we are building capacity in the Air Corps, as well as responding to the service demands of a search-and-rescue contract that we have some time now to prepare for after 2022 and 2023”.

He was responding in the Dáil to Sinn Féin TD Sorca Clarke who asked if the Minister would review the decision to remove the search-and-rescue role from the Air Corps.

She said the cost of the private contract was “eye watering” with a Department of Transport budget for these services of €60 million a year. She said that over the term of the 11- year private contract it would cost about €700 million.

Ms Clark said “this money would have been much better spent on investment in our Air Corps as the entity the State relies on for maintaining the service”.

Mr Coveney said the issue was about “ensuring we have the capacity to save lives at sea when people get into trouble” and that he would like to see the Air Corps and Defence Forces playing as significant a role as they could in any future contract.

He said, however, it was important to get it right and have “full and realistic consideration” of all the viable options because there was “considerable State funding at play here and the provision of a life-saving service is the ultimate aim”.

Ms Clarke said some six private companies were expected to bid for the new contract, and she claimed that “at least one of those is also contracted to do clandestine work for the British Ministry of Defence which in itself raises intelligence concerns.

“Such a decision would mean that the Irish Defence Forces would cease to have any control over the data or the intelligence gathered over this country as the aircraft would be departing from and returning to Britain. There is also the added lack of clarity of what impact Brexit would have on these agreements.”

The Minister said a group of experts would assess the tenders for the contract and insisted “we certainly will not be compromising any intelligence data”.