Fintan O’Toole: Parishes of Fermanagh and Tyrone are unravelling Brexit 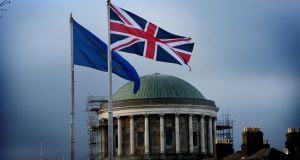 The Border problem can be dealt with only if the UK stays in the customs union and, preferably, also the single market. File photograph: Alan Betson/The Irish Times

If you write about Northern Ireland, you face heavy fines if you fail to refer regularly to Winston Churchill’s great rhetorical evocation of “the dreary steeples of Fermanagh and Tyrone” emerging from the deluge of the Great War with “the integrity of their quarrel” unaffected by the cataclysms of Europe. But almost nobody remembers that Churchill was not talking in general terms about the sectarian divisions of Ulster. He was being much more specific than that.

What he was addressing in that speech in the House of Commons in February 1922 was something that is once again a very live issue: the goddamned Irish Border and its endless capacity to drive British governments to distraction. And so here we are again.

Churchill was speaking in a debate about the Anglo-Irish Treaty and the establishment of the Irish Free State. The context, therefore, was partition and the as-yet unsettled question of where the Border would be drawn. Churchill evoked the Great War in this context because he wished to recall a cabinet meeting in which he had participated just before that calamitous conflict broke out. The Home Rule crisis was still unfolding. The question being examined by the cabinet was whether parts of Ulster could be temporarily excluded from Home Rule and if so where the boundaries were to be drawn.

“I remember”, said Churchill, “on the eve of the Great War we were gathered together at a Cabinet meeting in Downing Street, and for a long time, an hour or an hour and a half . . . we discussed the boundaries of Fermanagh and Tyrone. Both of the great political parties were at each other’s throats. The air was full of talk of civil war. Every effort was made to settle the matter and bring them together. The differences had been narrowed down, not merely to the counties of Fermanagh and Tyrone, but to parishes and groups of parishes inside the areas of Fermanagh and Tyrone, and yet, even when the differences had been so narrowed down, the problem appeared to be as insuperable as ever, and neither side would agree to reach any conclusion.”

It is a poignant, almost tragic image: Europe is about to implode and the imperial cabinet in London is peering through a metaphorical microscope at the ragged boundaries of parishes in Fermanagh and Tyrone. I like to think of the grandees sitting around the table in Downing Street saying the strange Gaelic names to themselves in tones of pure bewilderment: Belcoo, Magheraveely, Rosslea, Aghalane, Derrygonnelly. But the first time is tragedy; the second time is farce.

Theresa May’s cabinet is embroiled in a European war that is not so much a cataclysm, more a nervous breakdown. And beneath the noise and bluster, a low but persistent voice keeps whispering: Belcoo, Magheraveely, Rosslea, Aghalane, Derrygonnelly. The mock-heroic epic of Brexit is itself mocked by the contested contours of minute Border parishes. Pathos has become bathos. But the same fundamental truth applies: the problem of the goddamned Border is “as insuperable as ever”. No one can, or will, “reach any conclusion”.

Over the next eight weeks or so, two things will become clear and together they will force Leo Varadkar to show his steel. The first is that “sufficient progress” will not have been made on the Irish Border question to allow the Brexit talks to move on and deal with the final status of relations between the UK and the EU. The European Council is supposed to meet in October and at that point it is meant to give the green light for the substantive talks. It can’t do that unless there is at least a broad agreement on what the Border should look like. And this is simply not going to happen. The British position paper on the subject is so hopeless that it is hard to see any progress at all by October.

But the other big thing that is becoming clear is that the only “conclusion” that makes any sense is re-emerging as a concrete political possibility. The Border problem can be dealt with only if the UK stays in the customs union and, preferably, also the single market. The announcement on Sunday by the British Labour Party that it now supports doing this, at least for four years but perhaps for good, is thus of great moment for Ireland.

These two big developments will force the Government to do two extraordinary things. First, it has to face down the Tory government, which is desperate for the Irish issue to be shelved until the final status talks are complete. That cannot be allowed. As May herself might put it, it’s “sufficient progress means sufficient progress”.

Second, the Irish Government will, in effect, have to support the British opposition against the British government. The cause of (British) Labour is now the cause of Ireland: the soft Brexit that Jeremy Corbyn is now advocating is our vital national interest. We didn’t choose to make Ireland once again, as it was in 1914, an “insuperable” problem for British politics. But the road to the least worst Brexit lies through those parishes in Fermanagh and Tyrone – and it has no customs posts on it.

1 Joshua Allen jailed for 15 months for drugs offences
2 Murder in a crowded house: The full story of the Patricia O’Connor trial
3 Coronavirus: Aer Lingus cabin crew in self-isolation after passenger’s positive test
4 Coronavirus: Myths that have gained traction
5 Britain is uncomfortable because Ireland has the upper hand for the first time
Real news has value SUBSCRIBE