Kingsmill massacre anniversary: ‘We need to know the truth’ 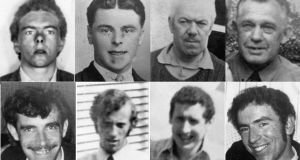 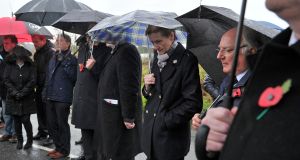 Relatives and friends of the victims of the Kingsmill massacre gather on the 40th anniversary of the incident, January 5th, 2016. Photograph: Justin Kernoghan/Alan Lewis/PhotopressBelfast.co.uk 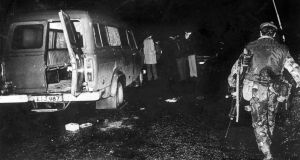 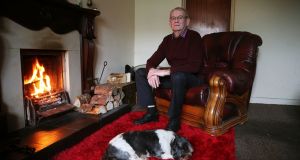 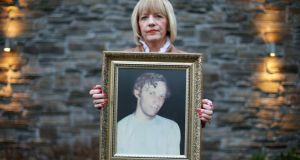 Karen Armstrong holds a photograph of her brother John McConville, who was killed in the Kingsmill attack. Photograph: Brian Lawless/PA Wire

The rain fell relentlessly and the sky was dark as relatives and friends of the 10 Protestant workmen murdered at Kingsmill, Co Armagh, stood on Tuesday morning under a huddle of umbrellas and wept.

Forty years ago, their relatives, driving home in a minibus from work at Glennane Mill, were flagged down by a man waving a red torch – the same type then used by the British Army at checkpoints.

Minutes later, the sole Catholic had been separated from the others and told to run. The rest were gunned down, each later shot in the head. Nearly 200 bullets were fired. Just one man, Alan Black, survived.

A previously unknown group, the “Republican Action Force”, claimed it had carried out the attack, but the Historical Enquiries Team found the Provisional IRA was behind the atrocity. The PIRA never admitted responsibility, however.

After a bugler played the Last Post, statements from the relatives of some of the men slaughtered on the lonely country road were read out by a member of FAIR, Families Acting for Innocent Relatives.

Many of the relatives are elderly and frail now and could not attend. Four decades on, the wives, brothers and sisters left behind have aged, but the pain is still raw.

Referring to the pre-Christmas Fresh Start agreement reached at Stormont House, Beatrice Worton, whose son Kenneth was killed, said there could be no start for the innocent victims.

Jane Lemmon (93), whose husband Joe was killed, said: “I have often been asked what I would do if I came face-to-face with the men responsible - and my answer to that is I don’t think I could hold myself back,” she said.

May Quinn, who lost her brother Robert Walker that night, said her family wanted to see justice done, but she wanted, too, to meet his killers to ask them whether they had repented.

“We as a family would love to see justice, but I also want to tell the killers that they will answer in the highest court of all, the highest judge of all. Forgiveness can only come to those who repent,” her statement read.

Usually, Racquel Brush, the daughter of one of the dead, Robert Worton, does not come for the Kingsmill anniversaries, but she could not stay away this year:

“It is very poignant and very eerie to be here,” she said, as she laid a poppy wreath at the memorial.

“I was only three in 1976 so I don’t remember my father, but I grew up knowing he had been killed,” she said. “We need to know the truth, at least. Forty years on, you’d think we’d have that.”

A black marble stone at the memorial wall is inscribed with gold letters describing the massacre as “the worst act of slaughter” in the Troubles and quoting the Book of Proverbs: “The Lord hates hands that shed innocent blood.”

Another stone erected by Beatrice Worton reminds those who stand before it that the Protestant victims of the attack had shielded their Catholic workmate, Richard Hughes, before they were massacred by “evil IRA cowards”.

The book of Romans is quoted: “Vengeance is mine I will repay, saith the Lord.”

Today, Alan Black, who survived multiple gunshot wounds, lives in the Quaker village of Bessbrook, a few miles away. Most of the dead were from the village. A memorial stone to them stands across the road from his terraced cottage.

Black has never been able to leave his house on the anniversary. Just as he has done in all previous years, he sat watching the relentless movements of the clock.

“From Christmas on, it is a countdown. Today it is every minute. It is half twelve now. The boys have five hours and thirty minutes to live. At five they will have half an hour. At half five they will be dead,” he told The Irish Times.

Gesturing to the rain beating against the window as his eyes filled with tears, he went on: “It is a dark, dreary winter’s day today, the same as it was then, and you are looking into more than sadness. I think about the boys all the time. But especially today.

“My wee apprentice, Robert Chambers, was only 17. John McConville’s family got a letter the day after to say he’d been accepted into Bible school to train as a missionary.”

The men had been talking about football as the bus made its way along the narrow roads through the drumlins. Normally boisterous, they were more subdued than usual that day.

The day before, six local Catholics – the Reaveys and the O’Dowds – had been murdered, so they were not surprised that they were stopped at the checkpoint.

Before opening fire, the killers had called for any Catholics to step forward. The two Chapman brothers each placed a hand on the arms of Richard Hughes to hold him back, believing he was the intended target.

Then, however, the gunmen said the Catholics were to leave, so he ran. Hughes has since died. For each of the days that were left to him, he was unable to come to terms with living, when the others died.

Alan Black was shot 18 times. Lying among the dying, he was certain that he too would be killed. Long after his physical injuries healed he, too, suffered from extreme depression and survivor guilt.

Following Kingsmill, Ian Paisley claimed the Reavey family were in the IRA, which was untrue. Black made a point of demonstrating that he was friends with the Reaveys, and that he would stay that way.

However, Black is proud that Bessbrook is a mixed village in which sectarianism has never flourished. “We will be holding a memorial event here on the 24th of January in the town hall,” he said. “Everyone is welcome.”

Recently, he took part in a BBC documentary which suggested that there was at least one security force informant among the gang that killed his colleagues that night.

“I don’t like conspiracy theories,” he said. “I have tried my best to put another explanation on it. But I can’t. There are too many unanswered questions. Why was the investigation never pursued? The police just turned their backs on us.

“We have always felt there was a cover-up, but now the nightmare is to think that they may have known this was planned - and did they sacrifice us to protect an informer? Was one of the gunmen an informer?”

No one was convicted of the murders at Kingsmill. Following an HET report, The North’s attorney general has ordered a fresh inquest, which is to be held this year.