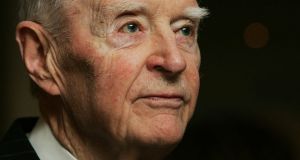 Tributes have been paid to former taoiseach Liam Cosgrave who has died at the age of 97.

Mr Cosgrave led the Fine Gael-Labour coalition from 1973 and 1977, ending a 16-year long domination of Irish politics by Fianna Fáil.

He was a son of WT Cosgrave who led the Irish State during the first decade of independence from 1922 until 1932.

President Michael D Higgins said he had learned with great sadness of the death of Mr Cosgrave, who was not only a former taoiseach, minister and party leader but a valuable member of the Council of State.

“Liam Cosgrave will be remembered not only as an effective cabinet minister but as a taoiseach with the capacity to win and secure the stability of a multi-party coalition,” Mr Higgins said.

Taoiseach Leo Varadkar said he was deeply saddened to learn of Mr Cosgrave’s death. “Liam Cosgrave was someone who devoted his life to public service; a grateful country thanks and honours him for that and for always putting the nation first.”

The Taoiseach said that throughout his life Mr Cosgrave had worked to protect and defend the democratic institutions of the State, and showed great courage and determination in doing so.

Patrick Cooney, who served as minister for justice from 1973 until 1977 said that despite the many pressures he faced during his 4½ years in government Mr Cosgrave had commanded a steady and strong loyalty from all his ministers.

“There were differences of opinion among us but never public dissent, leaks or shadowy briefings. That would have been disloyal.

“We gave and got loyalty from a taoiseach who held us together as a strong coalition. Wise leadership from Liam Cosgrave with strategic assistance from Brendan Corish [tánaiste and Labour Party leader] usually got us harmonious consensus.”

Mr Cooney, like many others who paid tribute on Wednesday night, said behind a rather austere front Mr Cosgrave was a very humane, courteous and witty man.

Former taoiseach John Bruton, who was a junior minister in the 1973-1977 government, said Mr Cosgrave had given great service to the State in extremely difficult times.

“He managed the coalition exceptionally well, and the two parties continued to work and campaign together right to the end. In this, he established an important precedent for future coalitions.”

Mr Bruton pointed out that, despite the economic and political difficulties, the Cosgrave government had introduced a range of progressive social welfare changes which had given increased security to families.

Former taoiseach Enda Kenny said Mr Cosgrave’s most striking quality was his unshakeable conviction, whether to his deep Catholic faith, or his commitment to the democratic integrity and security of the State.

“He was a man of great loyalty, old-fashioned courtesy, personal warmth and always had a great sense of humour,” said Mr Kenny.

Former minister Barry Desmond, who served with him as a TD for Dún Laoghaire, said one of Mr Cosgrave’s most significant achievements was to take decisive action in May 1970 to ensure that then taoiseach Jack Lynch dismissed Charles Haughey and Neil Blaney from government.