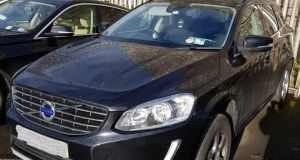 A Volvo XC60 SUV and a BMW 730D car were among the property seized in a Criminal Assets Bureau operation targeting an alleged Dublin drug dealer on Wednesday. Image: CAB 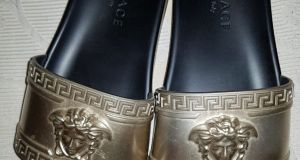 A selection of designer goods including a Gucci ‘manbag’ and a pair of Versace flip flops were among the items seized during the operation. Image: CAB 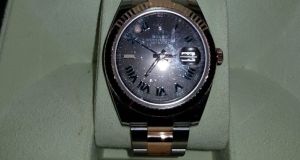 The alleged leader of a drugs gang operating in Dublin’s south inner city is at the centre of an inquiry by the Criminal Assets Bureau targeting his home and other assets.

The suspect, who is from Dublin and is in his 30s, has evaded any form of criminal prosecution and has only ever been before the courts for road traffic offences.

While the man began his drug dealing in south inner city flats, gardaí believe that over the past 15 years he has become a significant player in the Dublin drugs trade.

Gardaí carried out four searches, including two of business premises, as part of the operation targeting him on Wednesday and seized property that the force believes to have been purchased with the proceeds of crime.

An encrypted mobile phone, designed to prevent messages being accessed for intelligence or evidence purposes, was found and seized as were a BMW 730D car and a Volvo XC60 SUV.

A selection of designer goods including a Gucci ‘manbag’, Versace flip flops and four watches - a Rolex, Tag Heuer, Breitling and Bvlgari - was also removed from the property. Other items seized include three Canada Goose coats, five Moncler jackets, a Fendi handbag, a Michael Kors handbag and a Prada jacket.

Detectives believe the man’s home in Crumlin was purchased and extensively renovated using money earned through drug dealing. Cab officers assisted by officers from units including the Emergency Response Unit searched this home on Wednesday and another property in Tallaght.

Gardaí also took away banking and other financial documents, a computer hard drive and three mobile phones, including the encrypted one.

Unlike many of his contemporaries on the city’s drugs scene the suspect has never had any media profile, though several of his associates were killed in gun murders related to the drugs trade.

One of these was shot dead as his home in Tallaght in November, 2007. This man opened a car garage with the man now being investigated by Cab only a year before his death.

He was also close to a 40-year-old who was shot dead in October 2007 and was also involved in the car trade in Dublin.

Another of the Cab target’s associates was a high profile Dublin drug dealer. He killed a man in an assault at a hotel in 2006 and after serving his sentence for manslaughter died of an accidental drugs overdose in 2015.

Gardaí described the searches as a significant development in the ongoing investigation into the income and assets of the target.