Martin faces down parliamentary party critics of his strategy 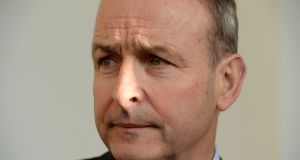 Micheál Martin: heard several TDs voice criticism of his approach, with the disquiet spreading beyond those who are usually opposed to the Cork South Central TD. Photograph: Alan Betson

Fianna Fáil leader Micheál Martin is to face down pressure from within his party to open talks with Sinn Féin and will continue with efforts to form a coalition with Fine Gael.

A meeting of the Fianna Fáil parliamentary party on Thursday heard criticism of his approach to forming a government.

It was the first time since the election that many Fianna Fáil TDs voiced criticism of Mr Martin’s approach, with the disquiet spreading beyond those who are usually opposed to the Cork South Central TD.

As well as calls for Mr Martin to talk to Sinn Féin – if not actually form a government with it – there was criticism of his repeated attacks on Mary Lou McDonald’s party.

One TD present said Mr Martin “flipped” at this point. Others, however, praised Mr Martin.

“He showed a bit of fire in the belly,” said one TD.

Mr Troy and Dublin South West TD John Lahart, another front bench spokesman, were among those who said Fianna Fáil should not confine itself to talks with just one party. Mr Lahart said Fianna Fáil had only begun to cross bridges and have t more left in this process.

They were supported in their calls by TDs John McGuinness and Eamon O’Cúiv, who have previously called for talks with Sinn Féin. In a sign of the robust nature of the meeting, Mr McGuinness was strongly criticised by the normally mild-mannered Sean Haughey.

Tipperary TD Jackie Cahill called for a full review into Fianna Fáil’s poor election performance, and said that the notion of a Fianna Fáil-Fine Gael coalition is not going down well among some members of the public. Limerick TD Willie O’Dea however warned against another election, given Sinn Féin’s popularity.

Two weeks ago, at their first meeting after the general election, Fianna Fáil TDs gave Mr Martin a mandate to open talks with other parties except Sinn Féin.

Although Mr Martin was said to be “pretty angry”, one senior TD said: “He made it very clear that he was continuing with the mandate given to him.”

Others said some in the party had been “caught on the hop” by Mr Martin’s interview with Seán O’Rourke on RTÉ yesterday, in which he confirmed he would enter government with Fine Gael and did not rule out a rotating Taoiseach.