Love Both spokeswoman says she is unavailable; RTÉ declines Steen as replacement 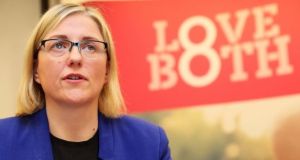 The Love Both spokeswoman Cora Sherlock has pulled out of tonight’s televised debate on the RTÉ programme Prime Time.

Ms Sherlock accepted the invitation to debate the Eighth Amendment to the Constitution, which bans abortion in almost all circumstances, last Thursday. She was to be joined by the Sinn Féin TD Peadar Tóibín in calling for a No vote in Friday’s referendum on whether to repeal the amendment. Minister for Health Simon Harris and Prof Mary Higgins agreed to argue for a Yes vote.

RTÉ was told today she was unavailable and that Maria Steen could take her place. The broadcaster said it could not agree to Ms Steen’s participation, however, as she had appeared on its first televised debate, on Claire Byrne Live on May 18th. RTÉ sources said the broadcaster would not be dictated to about who should appear on tonight’s programme.

The Save the 8th spokesman John McGuirk said that RTÉ was “playing outrageous games” and that it would not allow the broadcaster to “do to us what they did to Seán Gallagher”, in a reference to the 2011 presidential candidate whose appearance on a Frontline debate resulted in the broadcaster paying the businessman substantial damages.