Fintan O’Toole: Real choice is not Yes or No. It is What If? or As If 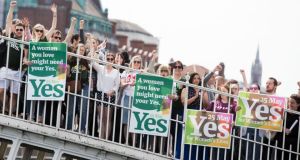 Repeal the Eighth: there is no compassion if we cannot ask “What if that were me?” Photograph: Tom Honan

What it comes down to is a difference of three letters and one question mark. It’s the difference between What If? and As If. Everyone old enough to vote on Friday has thought, What if? What if I get pregnant? What if my girlfriend gets pregnant? What if my daughter gets raped? What if the joy of “We’re going to have a baby?” turns into the anxiety of “I’m afraid I have some bad news”? What if the longed-for bundle of joy is already dead in the womb? What if my wife gets cancer?

What If? is where we live. It is the human uncertainty principle, the life that happens when you’re making other plans. We plan to have sex without getting pregnant, but life sometimes decides otherwise. We plan and dream and hope for the perfect pregnancy, but the tears of joy may turn to just tears. We want our children to be born into stable, happy homes, to have the right circumstances and the best chances, but sometimes the circumstances are wrong and the chances are mighty slim.

I don’t believe a single person who will vote on Friday believes that in a real, contingent, uncertain world, the answer to What If? is a constitutional certainty

The thing about What If? is that it is a question to which we seldom really know the answer. We know what we think we would do, or we think we know what we would do. But we don’t. Maybe the thing we dread – an unplanned pregnancy – would be the greatest blessing of our lives. Maybe the bad news of a test that shows Down syndrome would, if we’re able for it, turn out to be a deep enrichment. For some women the best choice might be to bring a pregnancy to full term even if the baby cannot live for more than a few seconds outside the womb. Or maybe not.

But against What If? there is As If. As If is the world as we think it should be. It is the world of eternal truths, fixed principles, pure ideals, timeless virtues. When it comes to the Constitution, As If is also about all those capitalised concepts, the State, the Nation, the Republic. When the Eighth Amendment was placed in the Constitution, in 1983, it was not just one clause among the others. It was a big As If.

What it says is that we must live As If. As if Ireland were a uniquely holy place. As if being a Catholic state for a Catholic people had been a fine experience. As if we could draw a moral border around the State and contain a special kind of purity within it. As if Life itself can be written with a capital letter, a pure concept, a fixed thing that is exactly the same for a fertilised ovum as it is for a 35-year-old woman with two kids, a mortgage, a job in pharmaceuticals, a vast store of memories and desires and a secret love of trashy novels. As if there were no What If?

How self-assured do you need to be to call yourself Pro-Life, to act as if everyone who did not agree with you were not just mistaken but were against Life itself?

As If is always easier than What If? It is fixed where the other is fluid. It provides answers where the other merely prompts more questions. It is all certainty where the other is all shades of perplexity. It sticks to principles that can be asserted all the more vehemently to silence private doubts and secret qualms. It makes Ireland into a moral reservation where there are no reservations. It banishes fears, regrets, anxieties, second thoughts and third thoughts. But it is only about what we like to think. It is not about what we do.

As If will always look more noble, more high-minded than What If? Its followers can offer assurance and conviction: how self-assured do you need to be, after all, to call yourself Pro-Life, to act as if everyone who did not agree with you were not just mistaken but were against Life itself? The What If? side can offer instead only a rueful resignation to the contingency of the actual. In an uncertain world it can propose no certainties. It is all lower case, not capital letters: pro-life, not Pro-Life.

But, as Brian Friel puts it in Translations, “confusion is not an ignoble condition”. There is no human compassion if we cannot ask “What if that were me?” There is no honesty or integrity in pretending to act as if we were something other than what we are. We cannot vote as if we had no uncertainties or hesitations, no misgivings or confusions. We can but acknowledge that in a world of doubts we should not presume to impose on others what we do not really know ourselves.