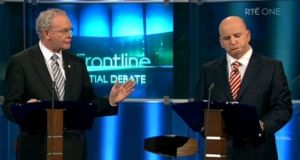 Sean Gallagher reacts to Sinn Féin’s Martin McGuinness during ‘The Frontline’ debate ahead of the 2011 presidential election. Photograph: RTÉ

Businessman Seán Gallagher has received “substantial” damages and an apology from RTÉ under a settlement of his action against the broadcaster arising from the “Tweetgate” incident during the 2011 presidential election campaign.

In its apology, RTÉ acknowledged the production of its Frontline Presidential Election Debate programme in October 2011 “fell significantly short of the standards expected by the public and required by law”.

Mr Gallagher was not in court but in a statement afterwards read by his solicitor Paul Tweed, he welcomed the apology and the settlement.

His motivation in taking the case was “not just about the unfairness shown to him but also about protecting the integrity of the democratic process and ensuring that what happened to him will not be allowed to happen again,” the statement said.

Mr Gallagher had claimed the programme featuring the election candidates was deliberately and unfairly edited and presented and directed by RTÉ in order to damage his electoral prospects.

His complaint centred on the use of a tweet mentioned during the programme which purported to come from an official Twitter account of Martin McGuinness, the late Sinn Féin politican who was also running for the presidency.

The tweet said a man alleged to have given a cheque to Mr Gallagher for a Fianna Fáil fundraiser would be presented at a press conference the following day. The Twitter account was not in fact Mr McGuinness’.

Mr Gallagher claimed the broadcast was neither objective, impartial nor fair to his interests and sought damages for alleged breach of statutory duty, negligence and misfeasance in public office.

His action included a claim for exemplary damages arising from comments allegedly made by broadcaster Pat Kenny in relation to “Tweetgate”.

RTÉ had denied the claims and also pleaded that Mr Gallagher had damaged his election prospects because of the manner in which he responded to particular assertions. The case was initiated in 2013 but had been delayed for reasons including disputes about discovery of documents.

Jim O’Callaghan SC, for Mr Gallagher, on Tuesday told Mr Justice David Keane that the entire proceedings had been resolved and he wanted to thank the court for giving time to facilitate that. The terms of settlement included a requirement that RTÉ apologise, he added.

Paul Gallagher SC, for RTÉ, then read the apology, which stated: “RTÉ acknowledges it made mistakes and failed to comply with its statutory duty under Section 39 of the Broadcasting Act in the court of the Frontline Live Presidential Election Debate programme which was broadcast on October 24th, 2011.

“RTÉ acknowledges it should have verified the origin of a tweet to which reference was made during that broadcast and that the tweet should not have been erroneously attributed to another candidate’s Twitter account.”

The tweet should not have been broadcast, RTÉ said. When it became apparent during the course of the programme that the post was false, RTÉ said it “should have immediately corrected the fact that the provenance of the tweet was mistaken. As a result, RTÉ failed in its obligations to Mr Gallagher”.

RTÉ said it fully accepted the findings of the Broadcasting Authority of Ireland ruling in March 2012 and the findings of an internal editorial review which “identified numerous failings in the broadcast separate to that of the tweet.”

Outside court, Mr Tweed, in a statement read on behalf of Mr Gallagher, welcomed that RTÉ had acknowledged its failures with due fairness and impartiality.