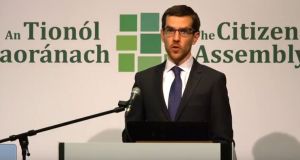 If the people, in the forthcoming referendum, remove the Eighth Amendment from the Constitution, the law on abortion in Ireland would not immediately or automatically change.

The law governing abortion would remain the Protection of Life During Pregnancy Act of 2013 unless and until the legislature votes to replace that legislation with a new legal regime providing for abortion in more circumstances.

This means that the referendum question – whether Article 40.3.3 should be removed from the Constitution and replaced with a provision empowering the Oireachtas to legislate for the termination of pregnancies – is separate from the question of what legal regime would be enacted should the referendum be passed.

Importantly, the Oireachtas cannot pass a law that violates any provision of the Constitution, and the existence of Article 40.3.3 makes almost any liberalisation of the current law unconstitutional. This means that liberalising legislation cannot be passed in advance of the referendum vote, or if the referendum fails.

Therefore, though we know the broad outline what that the Cabinet plans to include in proposed legislation, and we may get further details in respect of the bill that the Government would introduce, we could only be sure of the contents of a new law when enacted by the legislature after the referendum’s passage.

This puts our focus on the legislative process, and how laws are made and approved. Under the Constitution, laws must be passed by each House of the Oireachtas, the Dáil and the Seanad. The power of the Dáil - directly elected by citizens of eligible age - is greater than the indirectly elected Seanad, which has a more consultative role.

A bill passed by both Houses is sent to the President, who may sign the law, or refer it the Supreme Court to test its constitutionality before signing it.

In theory, the power to make laws rests with the legislature, and parliamentarians decide upon the content of bills. However, in reality, the power in the lawmaking process in Ireland usually rests with the executive branch, known as the Government.

In our system, the Government generally commands a majority of the votes in both houses of parliament. It also uses, in almost every vote, the parliamentary whip: political parties command their members to vote as directed by the party or else face expulsion from the party.

The Government will order its TDs to vote down any other bills other than those introduced by the Government, and any opposition changes to Government bills. The whip requires them to do so or lose their membership.

As a result, the legislative process in Ireland is usually highly predictable. Bills will pass if the Government wishes, and will contain nothing of which the Government disapproves.

The Government has agreed an outline of draft legislation that is broadly in line with the recommendations of the Eighth Amendment committee. Usually, we could assume that legislation proposed by Government will readily pass through the Houses of Oireachtas without major changes.

However, several factors complicate passing legislation in the event of the repeal of the Eighth Amendment.

The current Government is, unusually, a minority Government: it does not command a majority of votes in the Dáil, and relies on the support of other parties in order to pass legislation. To win this support, it may have to make concessions and alter its legislation.

The Government is also not able to reject proposed changes to its bill that it disapproves of if those changes win the support of a majority of parliamentarians.

Currently, the Government’s control over the lawmaking process is not nearly as strong as it has typically been, and parliament is much stronger. This adds some unpredictability, as the Government’s proposal may be altered by parliament against its will.

Moreover, the Government may give members of its parliamentary party a free vote on the issue of abortion, and not impose the parliamentary whip.

Since abortion raises moral questions about which many people disagree, and some disagreement on the legislation that might follow a referendum was apparent even within the Government, its TDs may be allowed to vote as their conscience dictates, and/or having regard to the views of their constituents. Other parties will likely do the same.

A free vote adds another element of unpredictability to the legislative process, as the views of individual parliamentarians - not the stance of political parties or the Government - will be of crucial importance.

The question of what legislation might follow a referendum will be difficult to answer definitively. Even though we know the main details of the Government legislative proposal in advance of the vote, we cannot know if the Oireachtas would ultimately endorse this, or change it during its passage.

This also means that voters would have a chance, by engaging with their elected representatives, to have a role in shaping this legislation. This issue will be decided, in the end, by representative democracy.

Dr David Kenny is Assistant Professor of Law at Trinity College, Dublin. He addressed the Citizens’ Assembly and the Oireachtas Committee on the Eighth Amendment