While EU protection for CTA will end, Brexit secretary is confident issues can be solved 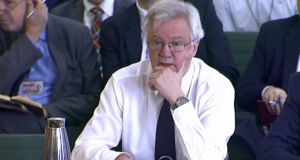 David Davis told the House of Commons Brexit committee that he remained confident that the CTA would survive because Britain, Ireland and the EU would wish to maintain it. Photograph: Getty

The European Union’s treaty protection for the Common Travel Area (CTA) will no longer apply after Britain leaves the EU, the UK’s Brexit secretary David Davis has told MPs.

Protocol 20 of the Treaty on the Functioning of the EU, states that the UK and Ireland may “continue to make arrangements between themselves relating to the movement of persons” between their territories.

“It is phrased, however, in terms of two member-states, so plainly that will fall out,” Mr Davis told the House of Commons Brexit committee.

“The only hiccup you could imagine is if the Commission itself said, we can’t have this special arrangement. I don’t think they’re likely to do that. It’s certainly our intention and the Irish Republic’s intention to maintain it.”

Mr Davis did not say what he expected the position of the CTA would be if Britain left the EU without agreeing any exit deal, as some Conservatives have suggested is highly likely. The Brexit secretary told the committee that his government had not yet made a full assessment of the consequences of leaving the EU without a deal.

He restated Britain’s commitment to keeping the border with the Republic as open as possible, suggesting that a new customs regime could be based on the existing “trusted trader” system for collecting excise duties.

“The fact is there is a border there now and there are excise duty differences across the border, which are collected, which are dealt with. But it operates in a subtle and not highly visible way,” he said.

“I am confident that the two nations and the Commission between them will be able to solve this because we really want to, because the technology is better than it was 20 years ago and because we all understand the value of it.”

Mr Davis said Britain was ready to invest in new technological systems to ensure that customs controls were as inconspicuous as possible.

“It is not going to be easy, it is going to cost us money, a lot of work on technology, to put border controls in but without having border posts - but that is what we intend to do,” he said.

If Britain leaves the common external tariff of the EU’s customs union, as Theresa May has promised, the border will become the external customs frontier of the EU. Ireland will then be obliged to follow EU rules on customs controls but Mr Davis said he was confident that the EU’s chief Brexit negotiator would help to ensure that a new customs regime would not undermine the political settlement in the North.

“We are not going to do anything which jeopardises the peace process. And it’s not just us, and it’s not just the Republic of Ireland, both of whom are absolutely committed to this...It’s also the Commission and this may sound odd but the Commission has a strong, emotional investment in the Northern Irish peace process. And indeed Michel Barnier, my opposite number, has,” he said.