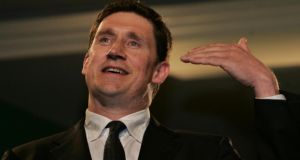 If you study ornithological journals closely, you will know that in 2011 there was a new addition to the list of endangered species.

But against the odds, the Greater Spotted Green has made something of a recovery since then with a nesting pair logged in the south Dublin region since February last year.

Politics is a volatile business these days. The electorate is no longer as loyal to parties and can be extraordinarily fickle.

People naturally do not like paying new taxes or sacrificing living standards they have struggled to obtain. Politicians are populist by instinct and always look for the path of least resistance. If they have to implement tough policies that are for the common weal but are not crowd-pleasers, they must brace themselves for near-extinction.

The Green Party experienced that six years ago but has managed to claw back at least some lost ground.

A number of factors contributed to that. The anger at its role in an austerity government with Fianna Fáil faded. There is a small minority of the electorate that very strongly believes climate change and protecting the environment are the biggest issues bar none. It saw that in the absence of the Greens nobody in national politics was taking up the cudgels.

And then there is a younger generation drawn to the aims and ideals of the Greens, indifferent to the Punch-and-Judy side of Irish politics.

The party’s fortunes are on the up – 12 councillors elected in 2014; two TDs in the Dáil; and two MLAs in the Northern Assembly. And that was reflected in its national conference in Waterford at the weekend. It’s still a small party – about 200 were present for party leader Eamon Ryan’s speech – but it is growing.

The party’s strategy now is to treble its number of council seats to 36 or more, and to double its Dáil seats to four. That’s a big ask. Catherine Martin is defending a seat in a very swayable three-seat constituency, Dublin Rathdown, while Ryan is probably a little more secure in Dublin Bay South.

The party will pin its hopes on Senator Grace O’Sullivan in Waterford and a possible gain in another Dublin constituency (Dún Laoghaire or Dublin Fingal), or possibly in Louth.

Greens have made inroads elsewhere in Europe but you wonder if the party can surpass the six seats it won in 2007 and 2002. Its message isn’t exactly sugar-coated. The stark realities of climate change will require stark decision-making. In leader’s speech that meandered at times, Ryan said it would involve the closure of Moneypoint and the peat-fuelled power stations, the embrace of more wind and of solar power, as well as a tangible modal shift to sustainable transport.

All that involves painful transition and redundancies. He said alternative employment would come if there was a proper nationwide campaign to do deep retrofitting of homes and buildings. All this is expensive though and the Greens have yet to spell out how these major changes can be financed and managed.

The reality is those changes must happen. And it’s clear there is a constituency there which believes the Green Party is the only one who can ensure that. How big is that constituency? Is it growing? The answer is probably small but growing slowly. The party will probably never be common or garden but looks like having a growing presence in the political habitat.