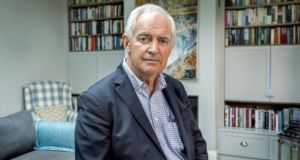 The chairman of the Institute of Obstetricians and Gynaecologists is Dr Peter Boylan, former master of the National Maternity Hospital. Photograph: Brenda Fitzsimons.

The Institute of Obstetricians and Gynaecologists has said chromosomal abnormality can rarely be diagnosed by the twelfth week of pregnancy.

In a statement released on Monday morning, the professional body said it was therefore “misleading” to suggest disability would be eliminated by introducing the type of abortion legislation being considered by Government.

“It is clear...that diagnosis of chromosomal abnormality, while technically possible, can rarely or realistically be achieved before twelve weeks. To suggest therefore that disability will be eliminated by enacting legislation in line with the recommendations of the Oireachtas committee is misleading.”

Noting that much of the recent debate has focused on Down syndrome, the Institute released a “questions and answers” statement outlining what screening tests are available to women in Ireland.

The statement says the results of the screening tests are rarely available within 12 weeks.

Later today, the Government will agree to hold a referendum on the repeal of the Eighth Amendment to the Constitution and replacement of it with an enabling provision giving the Oireachtas the power to legislate for abortion.

At a special Cabinet meeting this evening, Taoiseach Leo Varadkar and Minister for Health Simon Harris will seek support to hold a referendum on article 40.3.3 of the Constitution, which gives the unborn and the mother an equal right to life.

Mr Varadkar is expected to state his belief that the current position is too restrictive and needs to be liberalised. He will also confirm his intention to campaign in this regard.

Attorney General Séamus Woulfe will advise the Cabinet against a straightforward repeal, known as repeal simpliciter, and insist an enabling provision should be inserted into the Constitution in the event of a repeal.

The provision, which would state that the Oireachtas has the power to legislate for abortion, is necessary because it would provide greater legal certainty and would minimise the risk of a successful legal challenge, Mr Woulfe will say.

Such advice is expected to be challenged by several Ministers, including Minister for Children Katherine Zappone and Minister for Transport Shane Ross.

Mr Ross told The Irish Times he would be seeking an explanation as to the value of an enabling provision and why one was necessary.

However, Mr Ross and Ms Zappone stressed they would accept the advice of Mr Woulfe on the matter.

It is understood leaders of the Opposition parties will be briefed on the contents of Mr Woulfe’s advice, but it is unlikely it will be published.

Mr Harris will also seek formal clearance from the Cabinet to draft the general scheme of a Bill to provide for abortion up to 12 weeks, in line with the recommendations of the Oireachtas committee on the Eighth Amendment.

The Taoiseach will confirm his support for the proposals and insist this should provide the basis for legislation in the event of a repeal of article 40.3.3. Mr Varadkar will become the ninth Cabinet member to confirm they are in favour of the recommendations of the Oireachtas committee.

However, the position of Tánaiste Simon Coveney remains unclear. Mr Coveney, Minister for Jobs Heather Humphreys, Minister for Communications Denis Naughten, Minister for Agriculture Michael Creed and Minister of State at the Department of Defence Paul Kehoe are known to have reservations about the 12-week proposition. Government chief whip Joe McHugh has confirmed he is against such proposals.

Ministers will be asked to agree to a formal Cabinet position but will be allowed to dissent from that stance and campaign against it .

A spokesman for the Tánaiste said he will first make his views known to his Cabinet colleagues and “once the legal direction is approved he will be very clear and public about where he stands”.

Regarding the timing of a referendum, it is expected Mr Harris will offer an indicative time frame and will reiterate his position that it should be held in May.

However, he will stress he cannot be definitive until the referendum Bill is passed through both Houses of the Oireachtas.

The Minister and the Taoiseach are expected to confirm their belief a referendum should not be held any later than mid-June. The two dates being examined are May 25th and June 8th.