Budget 2019 analysis: Donohoe on tightrope between tax and spend 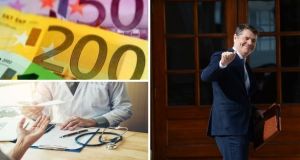 Protecting the centre is core to Donohoe’s world view. But recent evidence suggests the housing and health sectors will continue to struggle.

Budgets are always a tightrope walk for a minister for finance but Paschal Donohoe is as cautious and sure-footed as they come.

When announcing Budget 2019 today, he managed to negotiate hundreds of different interests coming from every imaginable group.

He had to balance the need to address the most vulnerable and urgent areas of society – health, housing and homelessness – while also ensuring his pro-business and lower-tax philosophy were served.

Donohoe has a reputation for caution and the narrative is his budgets are incremental, conservative and contained.

But that does not do full justice to what he announced today. He was tough in some areas and also had a few new announcements up his sleeve that somehow did not leak.

His decision to restore VAT to 13.5 per cent for hotels, restaurants and hairdressers, was brave.

It’s easy to provide a stimulus but much harder to withdraw it. The well-flagged move met with fierce resistance from the hospitality industry.

Justifying it, he said the reduced rate had done its job over the past six years. “I believe that in a new economic reality where the economy is strong, growth is broadly balanced and full employment is within sight, it is appropriate to increase the rate of VAT.”

Allied to that were the new measures. With the possibility of a Brexit deal emerging, there is a clear recognition of the need for more robust measures. They included a new “human capital initiative” worth €300 million. In addition there is a lot of resources for business, SMEs and the agricultural and food sector.

There is also a new exit tax which has been introduced as the EU’s Anti Tax Avoidance Directive begins to take hold. The exit tax will apply a rate of 12.5 per cent when a company migrates or transfers assets abroad, such that they leave the scope of our tax jurisdiction.

That will be applied from midnight tonight. It is a perceptive move that will prevent flight of assets by those corporations who want to hopscotch across the globe to avoid paying higher taxes.

There are a few other novel elements, including giving tax incentives to movie and film projects that shoot down country rather than in Dublin. The surfeit in corporation tax receipts will also be used to bolster the new rainy day fund, which has been established.

The welfare increases, including provision of the full Christmas bonus, will be welcome. But the cuts in income tax will be modest indeed, working out at no more than €4 or €5 per week.

Against that, there are large absences. Like virtually every other member of Cabinet Donohoe has talked up our climate-change obligations, but has not followed through with action.

There is no increase in fuel prices or in carbon tax. Despite saying that one in every five euro in exchequer investment in its 20-year plan will be allotted to climate change, there is little evidence of much of it materialising.

The best it can do is €103.5 million funding for grants in new afforestations. Again the Minister has pulled back from taking tough decisions on agriculture – indeed the Brexit-focused stimuli announced for agriculture could possibly lead to a short-term increase in emissions from this sector.

The headline figures for housing look impressive, with a total of €2.3 billion allotment in 2019.

The centrepiece is an expanded €310 million serviced site fund that promises 6,000 affordable homes.

Elsewhere there are more resources for all the headings: Housing Assistance Payments; homelessness, social housing; and local authority housing.

The figures are big but we have seen big figures before and then abysmal failures when it comes to delivery. There have been so many failures – particularly in relation to homelessness – that the huge funds being earmarked have become almost meaningless.

Nothing can be validated until the money has been translated into bricks and mortar, or whatever the A-rated equivalent is these days.

The overall state of the economy is good with growth at 7.5 per cent, 2 per cent above forecast. It is the first balanced budget in 10 years and Donohoe promises to be in a position to run surplus budgets in the next few years.

However, Irish Fiscal Advisory Council chairman Séamus Coffey’s criticisms of overruns and unaccounted spending (especially in health) in the past few years take some of the gloss of those claims.

It certainly is not an election budget or one that addresses the Brexit threat in a meaningful way.

In his final remarks Donohoe says this budget is about “securing our future and renewing the centre”.

Protecting the centre is at the core of this ideological Fine Gael politician’s world view.

However, the evidence from the recent past suggests the housing and health sectors will continue to struggle and falter.

This document will not provide a panacea. Unsurprisingly, after the Minister finished his speech, these were the areas the Opposition honed in on, with withering criticism of Government policy.

In addition, huge external threats posed by Brexit and by climate change will gain urgency in the years ahead. Only time will tell if the proofing is strong enough to withstand those cold winds.