Minister accused of ‘hitting the snooze button’ over carbon tax 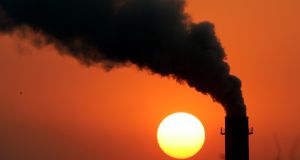 The Minister for Finance, Paschal Donohue, has signalled an intention to put in place “a long-term trajectory for carbon tax increases out to 2030” in future budgets

The Government has backed off any increase in carbon tax, but Minister for Finance Paschal Donohoe signalled an intention to put in place “a long-term trajectory for carbon tax increases out to 2030” in future budgets.

The announcement was roundly criticised by Opposition parties and environmental groups as an inadequate response to Ireland’s failure to reduce carbon emissions and to this week’s UN IPCC report which calls for “rapid, far-reaching and unprecedented actions” to stave off the worst effects of looming climate change.

Mr Donohoe said his move on the tax was in line with the recommendations of the Climate Change Advisory Council (CCAC), and insisted the National Development Plan would deliver a significant reduction in carbon emissions over the period up to 2030.

He welcomed the findings of an ESRI study as “a first step in better understanding the environmental, social and economic impact of carbon tax”.

It finds both households and producers would face relatively small increases in costs in the event of a higher carbon tax. The work was part of a research programme with the Department of Finance and Revenue Commissioners to examine impacts of an increase in the current carbon tax.

The CCAC, however, expressed its disappointment at the decision not to increase the carbon tax. “After this week’s publication of the IPCC’s special report on global warming of 1.5 degrees, which highlighted the absolute urgency to introduce measures that reduce emissions, this lack of action on increasing the carbon tax signals that the Government is not ready to take the obligations of tackling climate change seriously,” said its chairman Prof John FitzGerald.

“The council has consistently stated that the current level of the carbon tax in Ireland is insufficient to achieve our national climate change objectives, and that any increase in carbon taxation should be accompanied by measures to address negative impacts on poorer households.”

Fianna Fáil’s climate action spokesman Timmy Dooley said: “More floods, famine and enforced migration are all on the cards if countries, such as Ireland, continue to fail to grasp the reality of climate change.

“Despite the Taoiseach’s kite-flying in August, with his commitment for Ireland to become a world leader in climate change, the Government has done a complete U-turn on carbon tax. Actions matter, and when it comes to climate change this Government is all talk.”

Green Party leader Eamon Ryan derided Fine Gael for “abandoning even the faintest of hints that they want to do anything about the major challenge of our generation” in the form of accelerating climate change.

“Minister Donohoe has hit the snooze button. They are following a business-as-usual model which is not going to work, and which will cost us dearly inside of 10 years.”

It said the Budget had not increased carbon tax from €20 to €30 as recommended by the Citizens’ Assembly, the ESRI and the CCAC. “Even the Government’s own Committee on Budgetary Oversight has emphasised the need for using the fiscal system to support climate change policies in its 2017 pre-budget report.”

Friends of the Earth director Oisín Coghlan said the budget was a “staggering failure of political leadership on climate change. They raised expectations of a modest €10 increase in carbon tax and they couldn’t even deliver that. It’s a giant two-fingers to the Paris agreement and to our children’s future.”

Sadhbh O’Neill of Friends of the Irish Environment said there was enough information and advice to act resolutely on increasing the tax. She noted the ESRI had emphasised recently the importance of communicating a clear commitment to an increasing carbon tax by the Government.

“A 5 per cent reduction would be a significant positive step when Ireland’s emissions are going in the wrong direction. The Government is throwing away a perfect opportunity to act resolutely.”

The ESRI study estimates an increase in the carbon tax of €5 per tonne of CO2 will on average increase consumer prices (measured by Consumer Price Index) by 0.13 per cent and producer prices by 0.08 per cent.

One of the ESRI report’s authors, Kelly de Bruin, commented: “The relatively low carbon tax, which makes up less than 2 per cent of taxes on products, has limited impacts on prices and hence does not give consumers and producers enough incentive to decarbonise. To ensure a transition to a low carbon economy and to meet the EU emissions targets the carbon tax would need to increase significantly.”