Budget 2017: USC rates cut, social welfare up by €5 per week and ‘help-to-buy’ plan for first-time buyers

Minister for Public Expenditure Paschal Donohoe announces increases in spending on health, education and social welfare as part of Budget 2017. 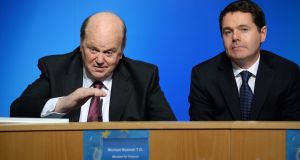 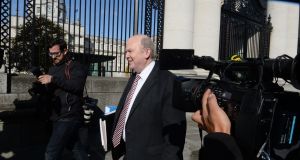 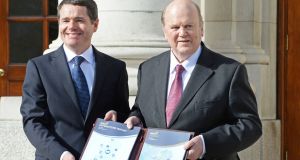 The majority of social welfare recipients will receive a €5 increase per week from March next year while first-time buyers have been given a tax rebate scheme as part of the €1.3 billion budget package announced on Tuesday.

Most Irish people should have on average an extra five euro in their pockets every week after a budget which was heavily weighted towards additional spending. Unemployed people aged under 25 will receive an additional €2.70 in their weekly payments.

The Christmas bonus for social welfare recipients was reinstated at a rate of 85 per cent, equating to €159.80 for most of those on welfare and €196 for pensioners.

In a spending-focused budget and the first budget by the minority Government, there was only one tax increase in the form of cigarettes, which will go up by 50 cent for a pack of 20. Other ‘old reliables’ such as alcohol and fuels were spared any increases.

Minister for Finance Michael Noonan announced his intention to introduce a sugar tax but said the implementation will be delayed until 2018.

The Christmas bonus for weekly social welfare recipients will also be increased from the 75 per cent payment last year to 85 per cent this Christmas.

There will also be a universal childcare subsidy for the parents or guardians of children aged between six months and three years, targeted at those on the lowest incomes, from next September.

In an effort to help first-time buyers and increase demand for newly-built houses, Mr Noonan announced an income tax rebate scheme of 5 per cent of purchase of a newly-built house up to a value of €400,000.

“In today’s budget the split between expenditure on services and investing on people and taxation was three to one,” he said.

“This is a significant achievement and a major department from the last Fine Gael/Labour budget.

Taoiseach Enda Kenny appeared on RTÉ television on Tuesday night to discuss the budget. Asked if he expected to be in the studio at the same time next year, he replied: “I hope so”.

Earlier on Tuesday it emerged that Mr Kenny intended to defend his Dáil seat in the next generation despite having said he would not lead Fine Gael into the next general election. However, a large number of his TDs expect he will step aside by the summer.

– Help-to-buy scheme to assist first-time buyers. It will give a rebate of income tax of 5 per cent of purchase of a new house up to a value of €400,000. That is worth €20,000 for a household which buys a house at the maximum value.

– Three rates of Universal Social Charge to be reduced by 0.5 per cent.

– Tax on cigarettes to be increased by 50 cent

– State pension to rise by €5 per week from March

– All social welfare payments to rise by €5 per week

A full list of the main points is available here.

A new affordable childcare scheme for all children aged between six months to 15 years has been hailed as a “breakthrough” by the National Women’s Council of Ireland.

The scheme, which will be provided from September next year, will provide means-tested subsidies, based on parents’ or guardian’s income and paid directly to child-minders or childcare providers. These must be registered with Tusla.

There will also be a universal childcare subsidy for the parents or guardians of children aged between six months and three years, targeted at those on the lowest incomes, from next September. Funding for this scheme is €35 million next year.

The Government also announced a number of measures to deal with the Brexit fallout.

These included breaks for tourism, food and agricultural businesses most directly hit by the UK’s decision to pull out of the European Union.

“Whatever the final settlement, what we know with certainty is that Brexit has increased risk to the Irish economy and, as well as introducing specific measures to assist particular sectors of the economy, we must also put in place safety nets to protect us against future economic shocks,” Mr Noonan said.

Measures which he called “economic shock absorbers” would allow Ireland deploy resources to reduce or eliminate the impact of future economic shocks linked to the EU referendum result.

These include a €1 billion a year rainy day fund which will be put aside from 2018 onwards, as well as a revised debt-to-gross domestic product (GDP) target of 45 per cent, significantly lower than the 60 per cent currently required by the EU.