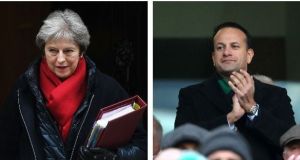 The phone call between the two leaders, organised at the request of Downing Street, comes two days before the EU releases the draft withdrawal agreement.

British prime minister Theresa May sought a phone call with Taoiseach Leo Varadkar on Monday night ahead of publication of the EU draft’s withdrawal agreement that is expected to ramp up tensions between her Conservative party and the DUP.

The call between the two leaders, organised at the request of Downing Street, comes two days before the EU releases the draft withdrawal agreement that will provide the legal backing to December’s “backstop” political agreement between London and Brussels guaranteeing that there would be no hard border.

The draft will heap pressure on Ms May at home and from the DUP, which props up her government, as the backstop would effectively keep Northern Ireland in the EU single market and customs union after the UK departs the bloc in 2019, in the absence of a wider EU-UK agreement or an alternative solution for Northern Ireland.

This would inflame tensions with the DUP as it undermines the commitment from Ms May’s government in December that there would be “no new regulatory barriers” between Northern Ireland and the United Kingdom.

Mr Varadkar and Ms May discussed the draft agreement on their phone call, said a Government spokesman and both said that they wanted the three options set out in the December agreement “to be examined in detail”.

This would include “the preferred option of a satisfactory solution to the Border problem being found within the overall future relationship between the EU and the UK”, said the spokesman.

The Taoiseach, however, stressed again “the necessity from the EU side to have the detail of the backstop option of full regulatory alignment spelled out in the draft legal text of the withdrawal agreement”.

“This option would only come into effect if agreement on one of the other options is not reached,” said the Government spokesman.

Ms May’s call with Mr Varadkar comes against the backdrop of considerable differences within her own party on how closely aligned the UK should stay with the EU after leaving the single market and customs union.

She will deliver a speech on Brexit this Friday. It will set out her government’s negotiating position that Brussels and Dublin are hoping will provide more clarity around the other options for the Border other than the backstop.

The draft agreement – due to be published on Wednesday – is said to be comprehensive and robust in the language around that option in the December agreement.

Minister for Foreign Affairs Simon Coveney said Ireland and the EU were completely “at one on how the text should look”. He was speaking after meeting EU chief Brexit negotiator Michel Barnier in Brussels,

It was “faithful and true to the agreement made in December and translating that into legal text”.