French connection may pay off for Irish firms post-Brexit 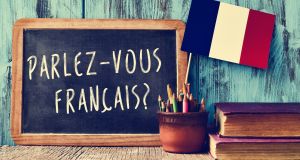 Brexit may be a concern for Irish companies with close business links with the UK, but almost 60 per cent of groups with trading links to France believe it will result in a significant upturn in their business, according to a new study.

The survey commissioned by the France Ireland Chamber of Commerce also found that just 12 per cent of companies felt Brexit was an explicit threat to their business, with 37 per cent unconcerned about it and almost a quarter viewing it as an opportunity.

A key issue for Irish companies is how Britain will deal with tax rates once it leaves the European Union, with about two-thirds of respondents concerned that the UK would lower its rates to attract foreign direct investment. The introduction of a hard border was a concern for almost 65 per cent of respondents, while about 60 per cent said Brexit would have a negative impact on their suppliers.

“The level of optimism amongst respondents - almost 60 per cent - who consider that Brexit will produce significant benefits for Irish-based companies trading in France is very encouraging,” said Noel Cunningham of accountants Mazars and chairman of the chamber’s working group on Brexit. “Almost 40 per cent of respondents, though, are worried that Brexit will have an overall negative effect on their business and this is symptomatic of concerns surrounding a hard Brexit.”

1 ‘I don’t need to do any of this. . .I don’t actually need to work.’
2 Direct sea routes to Europe offer certainty in choppy Brexit waters
3 Promontoria barred from pursuing doctor over Ulster Bank loan
4 Admission of mistake in Oxford vaccine dose raises doubts over reliability
5 Only way is up for Stripe as valuation skyrockets
6 Unilever’s Dutch and British arms merge after 90 years ahead of Brexit
7 Anti-alcohol zeal of public health experts peppers reopening debate
8 There was no vaccine for Anglo: Why the last crisis was different
9 Workers have little idea of the cost of retirement income
10 Fiona Reddan: Who’s afraid of Revolut? Not AIB and BOI it seems
Real news has value SUBSCRIBE