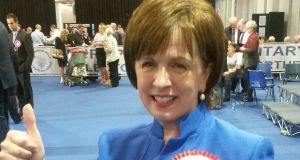 The proposed Brexit Withdrawal Agreement represents an “intolerable interference” in the internal affairs of the UK, DUP MEP Diane Dodds has said.

Speaking at the Constitutional Affairs committee of the European Parliament in Brussels on Tuesday, Ms Dodds said the requirement expressed in the agreement of regulatory alignment between North and South seems to have been proposed by the EU commission at the behest of the Government in Dublin.

She said it would be “economically catastrophic for Northern Ireland” because of the dependence of the North on trade with the rest of the UK.

Regulatory alignment between North and South would necessitate customs controls between the Noth and the rest of the UK, most observers believe.

Ms Dodds accused the EU of “cherrypicking” in drafting the Withdrawal Agreement by ignoring Paragraph 50 of the Decemeber agreement in which the UK expresses its intention not to erect obstacles to trade between the North and the rest of the UK.

Guy Verhofstadt, the chair of European Parliament’s Brexit steering group, had earlier spoken of North-Sout h regulatory alignment as the best way to protect the Belfast Agreement, the Common Travel Area and to prevent the hardening of the Border.