MPs to have vote on final Brexit deal before European Parliament 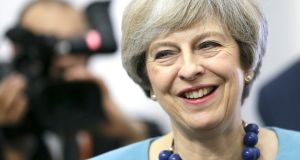 Britain’s prime minister Theresa May: MPs will not be allowed to stop Brexit or send her back to Brussels to negotiate a better deal. Photograph: Olivier Hoslet/EPA

The British government has told MPs they will have a vote on the final Brexit deal before the European Parliament has its say on whether to ratify the agreement.

Downing Street made clear, however, that MPs will have to choose between the deal Theresa May negotiates or leaving the EU with no deal at all.

“There will be a meaningful vote in the house and it will be on the deal that has been agreed or leaving the EU without that negotiated deal,” the prime minister’s spokesman said.

If Britain fails to agree an exit deal with its EU partners and a framework for future relations, the country will be forced to rely on World Trade Organisation (WTO) rules for trade with the EU after Brexit. Article 50 of the Lisbon Treaty stipulates that, unless EU leaders agree unanimously to extend the negotiating deadline, Britain will be out of the EU two years after formal talks begin, with or without a deal.

“Labour has repeatedly said that parliament must have a meaningful vote on any final Brexit deal – that means MPs are able to vote on the final deal before it is concluded; that the Commons has a debate and vote before the European Parliament does; and that the vote will cover withdrawal from the EU as well as our future relationship with the EU. This eleventh hour concession is therefore welcome, but it needs to be firmed up as the Bill progresses through both houses,” he said.

Green MP Caroline Lucas said MPs should not be “duped” by the government’s stratagem as they consider amendments to a bill authorising the prime minister to trigger article 50.

“The vote they’re offering – which will give MPs a choice between an extreme Brexit and falling off a cliff edge into WTO trade rules – isn’t a concession, it’s an ultimatum. Parliament should have a real voice on the terms of Brexit – not a symbolic handout from a government trying to railroad their extreme Brexit through the House of Commons,” she said.

Jeremy Corbyn has imposed a three-line whip on Labour MPs, ordering them to support the article 50 legislation, even if none of their amendments are successful. Although a few dozen Labour MPs, including some frontbenchers, are expected to defy the whip, the government is confident of a big majority for the Bill when MPs vote on Wednesday.