Brexit: Varadkar steps up plans for 'no deal' exit due to turmoil in Westminster 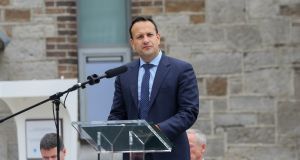 Taoiseach Leo Varadkar: because of “turmoil in Westminster”, the Government will step up plans for a “no-deal scenario”. Photograph: Gareth Chaney Collins

There is growing alarm in Dublin and Brussels that the British government is stepping back from, or will be unable to carry out soft Brexit positions in its White Paper, raising the prospect of a disorderly exit from the EU next year.

Taoiseach Leo Varadkar said on Tuesday that because of “political instability in London” and “turmoil in Westminster”, the Government here would step up plans for a “no-deal scenario”.

Minister for Foreign Affairs Simon Coveney will brief the Cabinet on Wednesday at its meeting in Derrynane, Co Kerry, about preparations for Brexit, including the recruitment of hundreds of customs officers and other measures at ports and airports.

Following votes in Westminster which hard Brexiteers said killed off Theresa May’s White Paper plans to stay close to the EU after Brexit, Mr Varadkar said the Irish Government “can’t make an assumption that the Withdrawal Agreement will get through Westminster”.

“It’s not evident or not obvious that the government in Britain has a majority for any form of Brexit, quite frankly,” Mr Varadkar said.

The Irish backstop is the last major issue outstanding to be agreed between the British government and the EU negotiators at the talks on a Withdrawal Agreement, which reconvened in Brussels this week, according to several people familiar with the issues.

However, at a negotiating session in Brussels on Monday, which focused on the Border issue, there was little evidence of any move in the British position.

One Brussels source said it “wasn’t the most constructive day on Ireland” and that the British approach had not changed since the publication of the White Paper in London.

The EU side believes there was little sign of any new instructions from London for the British negotiators which might lead to a breakthrough in the talks.

While Brussels and Dublin issued a cautious welcome to Ms May’s White Paper last week, they have made clear to the British government that a legally enforceable backstop – guaranteeing single market and customs rules for Northern Ireland in the event of no agreement between the EU and UK – must be included as part of an Irish protocol in the Withdrawal Agreement.

Privately, officials in Dublin and Brussels worry the British are “backsliding” on the White Paper commitments under pressure from Brexiteers in the House of Commons.

“The more it feels like the UK are backsliding, the more entrenched the EU will become,” said one source. “If prior commitments are detachable, then the negotiation process is fundamentally flawed.”

In the latest in a series of knife-edge votes in Westminster, Ms May on Tuesday night escaped defeat by just six votes on an amendment that would have kept Britain in a customs union with the EU in the absence of another arrangement to keep trade frictionless.

But the government suffered a surprise defeat when 12 pro-European Conservative rebels helped to pass an amendment to keep Britain in the European medicines regulatory network.

The votes came at the end of a heated day at Westminster as pro-European Conservatives sought to exact revenge on the government for caving in to Brexiteer demands on Monday. The government negotiated openly with the rebels on the floor of the House of Commons, with treasury minister George Holingbery offering to introduce a version of the customs union amendment in the Lords if the Commons version was withdrawn.