Attackers of Adams and Storey homes are ‘enemies of peace’ 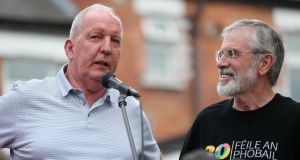 Ms McDonald joined several hundred people who turned out on Monday to protest against attacks on the homes of her predecessor Mr Adams and Mr Storey, a senior republican.

Their homes in west Belfast were targeted on Friday night in attacks Ms McDonald blamed on dissident republicans.

No one was injured in the incidents in which explosive devices were thrown at the homes of both prominent republicans, although Mr Adams said that his grandchildren were playing in the driveway shortly before the attack.

Monday night’s rally was held beside the former Andersonstown police station. It was also held to show support for the people of Derry who last week sustained six nights of disorder which dissident republicans were blamed for fomenting.

Ms McDonald said, to applause, “that unlike the cowards who attacked their family homes Gerry and Bobby are true and fine republicans “.

She described those behind the violence as sectarian, “backward-looking” and “mindless” thugs.

“You got that in one. You are certainly not going anywhere,” said the Sinn Féin president.

She urged the British and Irish Governments at next week’s meeting of the British Irish Intergovernmental Conference “to seize the opportunity” to deal “with the issues of equalities and rights which have seen an impasse in our politics and the suspension of our powersharing institutions”.

Mr Adams challenged those responsible for the attacks to justify their actions and explain the rationale behind it. “You are either for peace or you are against peace,” he said.

Mr Storey said those who carried out the attacks “need to go back to where they come from”.

He said they needed to get the message that they would not deflect republicans from their “road to a new and modern United Ireland”.

“We are here tonight to say we will stand for it no more,” said Ms O’Neill.