Boris Johnson to offer much needed distraction at DUP conference 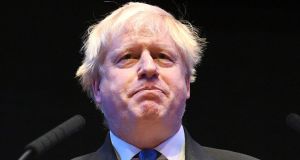 Boris Johnson should help banish some of the Brexit blues for 600 delegates attending the DUP annual conference in Belfast on Saturday.

The blues might not be Arlene Foster’s favourite music genre but as she faces into this weekend’s conference she would surely empathise with a line from the 1960s song Born Under a Bad Sign: “If it wasn’t for bad luck I wouldn’t have no luck at all.”

Things have not gone well for her since she took over as party leader almost three years ago. There is the collapse of Stormont, the Renewable Heat Incentive (RHI) calamity and Brexit.

An annoyed Foster and the likes of DUP MP Jeffrey Donaldson have been telling business leaders and farmers over the past week that they just “don’t get” how threatening to the union is the draft EU-UK withdrawal agreement.

Sammy Wilson went so far as to say the business and farmers’ representatives were “puppets” of Karen Bradley’s Northern Ireland Office. This from the DUP that proclaims itself “the party of farmers and business”.

For once – and this is a bit of a milestone in Northern Ireland politics – business and farming leaders bit back, insisting that they did “get it”, and stating that the Brexit deal was far better than no deal for the economy. They also cited the consent principle of the Belfast Agreement to argue there was no threat to the union.

It’s a mess on a number of fronts, and little wonder that ahead of this conference there has been talk of Foster’s leadership. Nobody has come forward as a challenger but people wonder whether Donaldson would fancy the post, while those on the more evangelical wing of the party could see Edwin Poots, also from the Lagan Valley constituency, as a possible contender. Nigel Dodds has always shied away from the responsibility of the job but if he wanted it, he probably would be favourite to take the position.

Some even wonder would Foster herself, rather like the Republic’s football managers Martin O’Neill and Roy Keane, just wish to get the hell out of the job and steer herself into the House of Lords or a winnable House of Commons seat, if such is available for her in Northern Ireland. It would, admittedly, be a tough task to oust Sinn Féin’s Michelle Gildernew from her home constituency of Fermanagh South Tyrone.

Foster would never have got a job as one of Napoleon’s generals because he liked them to be lucky. But then again you make some of your own luck.

The report early next year of Judge Patrick Coghlin’s inquiry into the RHI inquiry is forecast to be hugely critical of the DUP. There are local government elections next May which, as a consequence, could be tricky.

With this coming down the tracks, to add to current political woes, it is not a propitious time for Foster to be attempting to fire up the DUP faithful. Thank goodness then for “BoJo”.

It is easy to see why the party would like to have Johnson at the conference urging courage and confidence in the face of all those who challenge the DUP’s analysis of the EU-UK Brexit deal. His rumbustious presence and rollicking delivery will even remind delegates of the great days when Ian Paisley sent them into raptures with highflown, assertive oratory laced with humour and oodles of biblical references.The prominent Brexiteer and Conservative MP will be a much-needed diversion from the current gloom.

Her days are numbered but if you were in Jeffrey Donaldson’s shoes why would you come out right now when you’ve got the Brexit catastrophe unfolding, you’ve got RHI, you’ve got council elections?

Regardless, the DUP continues to find Brexit difficult and one of prime minister Theresa May’s supportive ministers – chancellor of the exchequer Philip Hammond – will on Friday attend a DUP dinner where he may push the case for the withdrawal deal. He will have his work cut out.

But it is not all the blues. Foster and her senior people will take comfort from the fact that they have a degree of political cover for their position. The Ulster Unionists, for instance, while ostensibly Remain during the Brexit referendum, also contend that the backstop is a threat to the union. Tory Brexiteers endorse the DUP stance. Even Labour leader Jeremy Corbyn talks of an unacceptable border down the Irish Sea, while the likes of former prime minister Tony Blair and his advisor Alastair Campbell are going for broke in seeking a rerun of the referendum by making the case that the Brexit deal is the worst of all worlds.

The DUP, therefore, is not alone and that point will be highlighted at the conference. Equally expect some business people and farmers to challenge the prevailing view that this deal is better than no deal.

Perhaps too the DUP can rest easy in the knowledge that the unionist/loyalist gut response to purported threats to the union – think about the protests about proposals to restrict the flying of union flags – will again trump pragmatic arguments about bread and butter matters.

And remember that the DUP is a party that takes pride in being ganged up on. During the years of exile, before Ian Paisley decided to do business with Sinn Féin’s Gerry Adams, it affected not to care what the establishment said, it held to its guns. “One with God is a majority,” was a Martin Luther dictum often heard at times of such tribulation. It might even be heard on Saturday, although the DUP isn’t just quite as fundamentalist as it was in the days of Paisley, “The Doc”, even if it still manages to offend the liberal lobby.

As for Foster’s political future, perhaps she is earning a little bit of luck because Brexit also may be a distraction from thoughts of a leadership challenge. Like May, as one well-placed observer noted, “she has survived this long and may survive a bit longer”.

“Her days are numbered but if you were in Jeffrey Donaldson’s shoes why would you come out right now when you’ve got the Brexit catastrophe unfolding, you’ve got RHI, you’ve got council elections?” he reasoned. “The position may be, let her carry the can until after the local elections in May and then bring in a new broom.”

Foster can take comfort from events across the water. Months ago, May’s demise was widely forecast. Yet somehow she is still in charge.