Review of rape cases to consider how victims give evidence 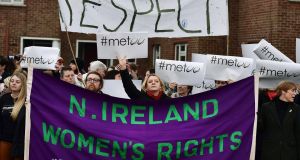 Protestors demonstrate outside Kingspan stadium on April 13th. The trial of rugby players Paddy Jackson and Stuart Olding resulted in a number of protests across the country. All four men in that trial were acquitted. Photograph: Charles McQuillan/Getty Images

A review of rape cases in the Republic is to examine if victims of sexual assault should be allowed to pre-record their evidence.

Minister for Justice Charlie Flanagan is to initiate a review of all rape trials, in light of concerns raised in response to the Belfast rape trial.

Mr Flanagan is to meet a number of advocacy groups on Monday and will also hold discussions with the legal profession about what changes they believe should take place.

The Irish Times understands the recommendations made in the recent Rape Crisis Network report will form the basis for the review.

The proposals by that organisation included pre-recorded cross-examination for complainants, additional training for gardaí and members of the judiciary and the availability of special measures for vulnerable witnesses and accused persons.

The legal protection afforded to complainants will also form part of the terms of reference.

Speaking to The Irish Times, Mr Flanagan said: “I have asked my officials to bring forward proposals on a review of the legal protections available to victims in sexual assault cases.

The trial of rugby players Paddy Jackson and Stuart Olding resulted in a number of protests across the country. All four men in that trial were acquitted. Demonstrators have been demanding changes to the justice system in Northern Ireland and the Republic to assist victims of sexual assault.

While cases in the North are tried differently, Mr Flanagan said the case had initiated a broader conversation about the issues of consent and sexual offences. The court system must not be a “cold and distant” place for complainants in these cases, the Minister added.

The issue was raised in the Dáil yesterday by Sinn Féin spokesman on justice Donnchadh Ó Laoghaire, who questioned when the review would be completed and if legislation would be required.

There was no time period outlined but it is expected the review will begin in the next number of weeks and legislation may be required thereafter.

Fianna Fáil spokesman on justice Jim O’Callaghan said the review should examine why many complainants do not feel comfortable taking the case to trial.

It had become an “alien process” where those who make allegations of sexual assault are challenged and issues in their personal lives are unnecessarily exposed, Mr O’Callaghan added.

Individuals should be able to access legal advice from the Director of Public Prosecutions about what the process will entail before a court case begins, the Fianna Fáil TD said.

The Minister for Justice was also questioned on when a review of domestic and sexual violence data collection and analysis by state agencies will be commissioned.

Sinn Féin leader Mary Lou McDonald said it was essential the “significant shortfalls in data collection and management within state agencies such as An Garda Síochána, Court Services, Tusla and the Health Service Executive” are overturned.