The Troubles – a euphemism for bloody conflict 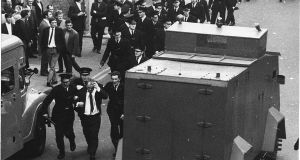 A man is led away past a police waterwagon after he was injured during the police baton charge during a civil rights march on October 5th, 1968. Many believe this was the start of the Troubles.

It is perhaps unsurprising that in Ireland the most sustained period of intense violence in modern Irish history is universally known by the neutral, even understated term, the Troubles.

The term was originally used to describe the Irish Revolution of 1912-23, spanning the Ulster Crisis over the Third Home Rule Bill, the Easter Rising, the War of Independence and the Civil War.

However, there is some evidence that in the North it was used in popular parlance to characterise the period of the United lrishmen and 1798 Rising in Antrim and Down – largely a Presbyterian affair.

In her dramatic ballad, The Man from God Knows Where, written in 1898 on the centenary of Wolfe Tone’s insurrection, Ulster poetess Florence M Wilson writes of the Battle of Ballynahinch in Co Down in June 1798: “Three winters more and the troubled year . . .”

The use of the term to describe the 1919-21 struggle for independence is captured in the title of JG Farrell’s 1970 novel Troubles, and also features in Seán O’Casey’s work on the period.

However, its use in connection with the onset of the Northern Ireland conflict first surfaced in the Belfast press after the first deaths in the city in August 1969.

Reporting on August 15th, 1969 that three men and a nine-year old boy had been shot dead after a night of carnage, the Belfast nationalist daily, the Irish News, referred to the violence in its front page story as “the worst flare-up since the 1921 Troubles”.

The mot juste had been coined; a euphemism which had the advantage that it avoided ascribing blame to any of the participants.

Within days the term was the favoured shorthand of the Irish, British and international press corps descending on Belfast and Derry to cover the convulsions of a society in turmoil.

A decade later in 1980, Thames Television screened a series on the conflict with The Troubles as its title. And today, half a century later, the Northern political parties and the two governments are still struggling with the complex legacy of some 3,600 Troubles-related killings.

There is still, however, a debate among historians and those affected by the 30-year conflict as to when the Troubles began. For some it was October 5th, 1968 when a civil rights march in Derry was brutally batoned by the Royal Ulster Constabulary (RUC) in compliance with a unionist government ban. These violent scenes, screened across the globe courtesy of RTÉ footage, alerted public opinion in Britain and abroad that Northern Ireland – Britain’s back yard – was not a normal part of the UK and resulted in a London-driven reform programme.

The Wilson Labour government could not have foreseen the implosion of unionism on the core civil rights demand of “one man, one vote” – granted in Britain in 1945 but withheld by Stormont for blatantly political reasons.

There followed the “Protestant backlash” led by Rev Ian Paisley, initially regarded as a figure of fun by middle class unionism, the ambush of the radical student march at Burntollet in January 1969, a UVF bombing campaign which forced Terence O’Neill from Stormont government, and the tragic events of August 1969 in Derry and Belfast.

For others, the Troubles began that August with the Battle of the Bogside and the explosion of violence in Belfast on the night of August 14th, 1969 which witnessed six deaths, the use of armoured cars with heavy machine guns by the RUC, and the burning of 600 mainly Catholic homes on the Falls Road by loyalist mobs, accompanied by mobilised B Specials, a sectarian auxiliary police force established at partition.

As British troops arrived on the streets and the first “peace lines” emerged, one thing was clear: things would never be the same again.

Dr Éamon Phoenix is an historian and commentator and the author of The lrish News: 100 Years of Ulster History. He is a member of the Taoiseach’s Expert Advisory Group on Centenaries.