Boris Johnson has ‘no meeting scheduled’ with Leo Varadkar 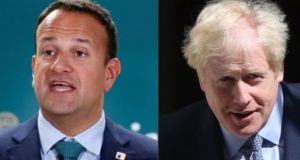 A report in the Sunday Telegraph said an offer to meet Mr Varadkar to talk about the backstop, an insurance policy aimed at avoiding a hard Border that was included in the withdrawal agreement reached between the EU and UK, had been accepted and dates were being discussed.

The spokesman also said Mr Johnson had been clear he still wanted to get a Brexit deal but hoped the EU understood the UK government’s determination to leave the union on October 31st, “no ifs or buts”.

On Sunday, an Irish Government spokeswoman said: “The Taoiseach has invited the British prime minister to Dublin for talks on Northern Ireland and Brexit.

“Their offices are in contact to agree a date for these talks in the coming weeks. Such a meeting would give both sides an opportunity to gain a better understanding of their respective positions.

“As has repeatedly been made clear, the withdrawal agreement and the backstop are not up for negotiation. Any discussions on changes to the political declaration would occur between the UK and the EU.”

Although no date is scheduled for the meeting, Downing Street said Mr Johnson has accepted Mr Varadkar’s invitation. Work on finalising an the date, and other arrangements, for the meeting is ongoing.

On Monday, Irish Government sources said they still expect a meeting to take place in the coming weeks, adding that contact is ongoing between officials in London and Dublin. One figure said a meeting would not ordinarily be scheduled until all details, such as a suitable date, have been finalised.

Mr Johnson is due to meet French leader Emmanuel Macron, German chancellor Angela Merkel and US president Donald Trump in Biarritz in two weeks’ time at a G7 summit.

Sources had expected that the first bilateral between Mr Varadkar and Mr Johnson would be delayed until after the G7 meeting, with a date in early September mooted.

Earlier this month, Mr Varadkar invited Mr Johnson to Dublin during an initial phone call between the pair. Mr Johnson did not immediately take up the offer. Brussels and London remain at loggerheads over the prospect of fresh Brexit negotiations.

The British government has said any new negotiations must focus on developing an alternative to the withdrawal agreement.

On her first visit to the Irish Border, Liberal Democrat leader Jo Swinson said there is no “good Brexit” for Northern Ireland.

“I felt it was important to come and listen to people and community groups about their experiences and about what the prospect of a hard border means to the communities. It’s very powerful hearing from those individuals who live and work in this area,” she said.

“We have been fighting for there to be no border here where I am standing and the way in which that has operated successfully for years now has been as members of the European Union and we are still members of the EU and it is still possible to stop Brexit.”

“I recognise that for communities here the backstop is an important insurance policy but the best possible outcome is to have Northern Ireland and the Republic of Ireland both within the EU so that we can have a strong UK, in a strong EU so communities can live, work and go about their daily lives without the hassle of a hard border and without all of the downsides for our economic prosperity that will ensue if we do go ahead with Brexit.”

Ms Swinson also said she was “not surprised” that Mr Johnson took almost a week to contact Mr Varadkar after his appointment as prime minister.

“He was perhaps our worst ever foreign secretary and does not possess the skills or diplomacy that was required for that role so we shouldn’t be shocked that in the role of prime minister he is also not demonstrating that statesmanlike approach that ought to be needed,” she added.