Eyewitness: Jeanette Warke was a working class Protestant mother-of-two when violence broke out 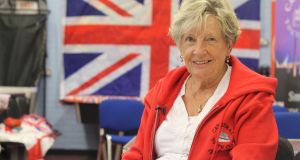 Jeanette Warke wonders what the Troubles were all about – ‘Some say it was about a united Ireland. There’s no united Ireland.’ Photograph: Ronan McGreevy

In 1969, I was 25 and I had two children and was living at 16 Mountjoy Street. It was near where I was reared. We had a great childhood growing up in a mixed neighbourhood. There was never a mention of Catholic or Protestant though we went to different schools and different churches. We never wanted for anything. We were brought up in a household where you respected people. You respected your clergy, your teachers and the police, the RUC.

Then the army arrived in. That was horrendous because they arrived in with barbed wire

I’ll never forget that day, the 12th of August 1969. I was down in Waterloo Place. I had two kids, one in a pram and the other holding on to the handle. I saw these men and they were like rag dolls, all lying against Littlewoods which was a store at the time. Their faces were all dusty and black. It was the RUC and the B-Specials. They had come out of the Bogside. They were shattered.

I remember coming home and I was scared and I asked myself what’s going on in our city.

Then the army arrived in. That was horrendous because they arrived in with barbed wire. I thought then that was the end of the world.

After the Battle of the Bogside, I never ever thought I would live through 25 years of terror, murder, bombing, mayhem

I remember at one stage during the week, we went to Castlerock which was a small beach in Co Antrim. I’ll never forget my father had his pocket radio. He jumped up and he said, “We’ve got to go home, the city’s burning.” We piled into that car and we were scared. It is not often I see my father agitated. He was a placid man who wanted an easy life.

As we drove in, we could see the sky red with the buildings burning. I remember thinking that our city is going to be burnt to the ground. Are our houses going to be there when we cross the bridge?

I was brought up in a working class family and we weren’t top of the barrel for getting the good jobs.

As a Protestant, we didn’t have anything to do with the civil rights movement. We were told the IRA would be there. At that time the IRA struck fear into our hearts.

Then some of my Catholic neighbours said to me that this was for people living in bad housing conditions, it’s for people with no jobs and against the gerrymandering in the city.

After the Battle of the Bogside, I never ever thought I would live through 25 years of terror, murder, bombing, mayhem. I honestly don’t think I could have coped if I thought at the time it would last that long.

As you work through it all, you take it all in your stride. You just go from day to day and hope that things will get better.

Thousands were killed and so many maimed. We are sitting here in 2019. What was it all about? Some say it was about a united Ireland. There’s no united Ireland and nor can I see one in the future because it’s not what people want.

Jeanette Warke runs the Cathedral Youth Club in Derry’s Waterside area. She was in conversation with Ronan McGreevy