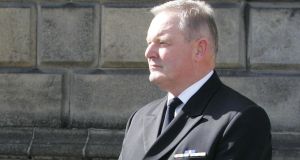 Captain of the guard John Flaherty has been urged to make a statement on his attendance at the Clifden golf event given the seniority of his role within Leinster House. Photograph: Dara Mac Dónaill

A number of TDs have called on the captain of the guard in Leinster House to explain his attendance at a controversial golf society event in Clifden last week.

John Flaherty, a senior Oireachtas official who oversees the day-to-day management of the complex, attended the function last week alongside 80 others including the now-resigned minister for agriculture Dara Calleary and EU trade commissioner Phil Hogan.

A number of sources on the Oireachtas Commission, the governing body which oversees the delivery of services to the Houses of the Oireachtas, have told the Irish Times they believe Mr Flaherty should make a statement on his attendance given the seniority of his role within Leinster House.

“It is not just politicians who believe this is serious but staff here too, so he does need to explain himself, ideally before the Dáil returns,” a commission source said.

Rise TD Paul Murphy said he believed “We need to hear a full explanation and apology from Mr Flaherty. It is difficult to see a circumstance where it would be appropriate for him to retain responsibility for the implementation of the Covid guidelines within the Dáil, given that he was so blatantly in breach of those guidelines himself.”

Meanwhile, it has emerged that a parliamentary assistant for the Minister of State for Public Health was also a guest at the golf society dinner.

Imelda Henry, a former Fine Gael senator, was seated at table six, alongside former MEP Brian Hayes, who is the current chief executive of the Banking and Payments Federation of Ireland (BPFI).

According to the website of the Minister of State with Responsibility for Public Health, Wellbeing and the National Drugs Strategy, Frankie Feighan, Ms Henry is one of three parliamentary and secretarial assistants aiding the Minister in his role.

As he is Minister with responsibility for public health, Covid-19 is one of many issues that would come under his remit. Mr Feighan did not respond to requests for comment on his assistant’s attendance at the event.

Ms Henry has yet to respond to calls or emails from The Irish Times. However, in a statement to her local radio station, Ocean FM, at the weekend, Ms Henry apologised for her attendance at the dinner, adding that it was a lack of judgment on her part.

Ms Henry said she attended the event in a private capacity while on holidays. She added that she attended the dinner under advice from the function’s organisers that it was fully compliant with the Irish Hotels’ Federation and Fáilte Ireland’s Covid-19 regulations.

“I am acutely aware of the huge upset this issue has caused to many people nationally and, for this reason, I want to apologise unreservedly,” she said.