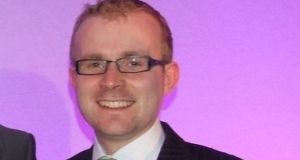 Barry Walsh is the vice chairman of the Fine Gael executive council.

Barry Walsh has resigned from the executive council of Fine Gael and has said he deeply regrets the tone and language he used in tweets that he has posted.

He also accepted that some tweets had caused “serious offence” to many people and I apologise unreservedly for that”.

Mr Walsh has been under considerable pressure to stand down since it was disclosed earlier this week that he had posted abusive and personalised tweets.

He resigned in an e-mailed letter to Gerry O’Connell, the chair of the party’s executive council on Friday afternoon. Fine Gael said it accepted the resignation.

Mr Walsh said he hoped his resignation would help prevent further distraction on this issue and bring to an end the “trial by media” which he said he had endured for 48 hours.

He said it placed “intolerable pressure” on his family and friends.

“I deeply regret the tone and language I used in some of my tweets. I realise that some of my remarks have caused serious offence to many people and I apologise unreservedly for that.”

Mr Walsh said that he had first become involved in politics becuase he had passionate views.

“I have always enjoyed robust political debate. However, I accept that with many of these tweets I took the political jousting a step too far.”

He said he looked forward to the matter being considered by the executive council and his resignation was without prejudice to any disciplinary investigation.

“I won’t be commenting publicly on this matter until that process has concluded, he said.

Mr Walsh will remain a member of Fine Gael.

Taoiseach Leo Varadkar earlier called on Mr Walsh to resign from the Fine Gael executive council pending inquiries into abusive tweets he posted. Speaking to journalists on his arrival at the Gothenburg Social Summit on Friday, Mr Varadkar said: “Mr Walsh’s conduct is below the standards of what I’d expect from a Fine Gael officer.”

Mr Walsh will face an internal disciplinary inquiry over tweets in which female politicians and pro-choice campaigners were described in derogatory terms, including “bitch”.

“ There are lots of trolls, lots of nasty people, and lots of horrible language on Twitter, but I expect Fine Gael officers to set a higher standard and I think at this stage it would be for the best if he resigned and stepped down as a member of the Fine Gael executive council pending disciplinary procedure which is now under way,” said Mr Varadkar.

The Government has rejected suggestions that the Taoiseach had awareness of Mr Walsh’s abusive tweets before this week.

“The minute he found out about it he acted on it in a clear and decisive manner,” said the spokesman.

He said the Taoiseach became aware for the first time of abusive tweets posted by Mr Walsh only on Tuesday night.

The issue was brought to light by Dublin Bay South TD Kate O’Connell at a Fine Gael meeting on Tuesday where she presented a series of tweets by Mr Walsh, some of which were directed at her.

Senior sources in the party also made clear Mr Varadkar and Mr Walsh were never close colleagues in Fine Gael, despite the Dublin-based executive council member’s strong support for Mr Varadkar during the leadership campaign.

“As far as we were concerned he was a fringe figure in the party,” said one source.

The tweet that has caused the angriest reaction was one he posted about comedian and actor Tara Flynn, who had a termination.

He wrote: “From what Tara Flynn says, she was pregnant and just couldn’t be bothered having a baby. So she had it killed. Why is she a feminist hero?”

Ms Flynn tweeted in response: “I’d like to meet Barry Walsh. I don’t expect an apology, but I’d like him to sit across from me and say whatever he has to say.”

The leader of Fianna Fáil Micheál Martin also said the tweets were unacceptable and wholly inappropriate.

He said there was probably a need for his party to review its guidelines to ensure that the party’s officers and members uphold the highest standards.

“The social media companies have a lot to [ANSWER)]as well.

“Social media companies standing back and saying that has nothing to do with us. I don’t think that is sustainable.

This trolling is ongoing now,” he said.

Mr Walsh was director of elections for Fine Gael in the Dublin North East and became involved in a protracted dispute with candidate Stephanie Regan over election expenses. Mr Walsh claimed she had to pay €5,000 in election expenses. When she contacted Fine Gael headquarters in November 2016 seeking resolution of the matter, it was confirmed she had no obligation to do so.

Speaking of her dealings with Mr Walsh, Ms Regan told The Irish Times on Friday, it was “pincer-movement bullying and relentless pursuit.”

She said she was unaware of his abusive tweets at the time but became aware of them later. She said she contacted Mr Walsh via Twitter.

“I said to him you need to rethink your derogatory language. I could not believe that somebody would do that on Twitter.”

She said she had not passed on her concerns to the party at the time.

“I made him aware of it on Twitter. I was always pro-choice. I wonder did that play a part? You look around you and look at things latterly,” she said.

She said Mr Walsh had “dug a big hole for himself” with his tweets.

“He is a black and white guy but that’s not all of life. I would be the polar opposite.”

Councillor Naoise Ó Muirí, who was also a candidate in Dublin Bay North in 2016, said the tweets were wholly unacceptable and called on Mr Walsh to apologise for them.

He said he had had his differences with Barry Walsh having worked with him, but also said he, Mr Walsh, had made a positive contribution to Fine Gael.

“He does have a mandate. He is elected by Dublin members to the Executive Council. That does not excuse his commentary.

“However, he does deserve due process like everybody else. Any member in Fine Gael involved in a disciplinary process deserves that,” he said.

He added: “At a personal level it is not an easy place for him to be at the moment, people need to beware of that.”