Asylum seekers should be allowed to cook, says Fitzgerald 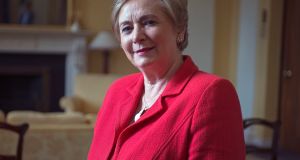 Asylum seekers living in direct provision centres should be allowed to cook their own meals, Minister for Justice Frances Fitzgerald has said.

Ms Fitzgerald told The Irish Times that while the centres will remain, facilities could be improved to ensure those in such accommodation are “self-empowered”.

The Tánaiste said the Government was making efforts to improve facilities in many centres, adding: “It is very basic for a family to be able to cook for themselves.”

Last month, chefs Darina Allen and Jess Murphy called on the Government to allow all people living in direct provision centres to cook their own meals. Ms Allen called the “cooking ban” barbaraic and made her “ashamed to be Irish”. A spokesman for Ms Fitzgerald said there was not necessarily a ban but the difficulty was the lack of cooking facilities in many centres.

Ms Fitzgerald acknowledged there was a need for improvement across all direct provision centres – including in Mosney, Co Meath, which, she said, had the best facilities.

“There are cost implications. We need to have more cooking facilities. We are working on all of that.”

She said the omission of the McMahon Report – which recommended changes to the direct provision system – from the Programme for Government was due to logistics and there has been no change in policy. At the start of this month, 4,439 people were living in direct provision, with 1,177 of these aged under 18.

Ms Fitzgerald said the vast majority of those who were in direct provision for more than five years had been “dealt with”, with some of that group remaining unresolved because they were living in local communities.

The authorities could not contact such people, she said.

“There is a kind of a response to the phrase ‘direct provision’. If we start allowing and making it easy for people to cook and have as much control as they like themselves, then direct provision won’t be there anymore.

“We can actually move away from the concept in the sense that direct provision means you are supplying everything for the person, as aside from a more self-empowered situation for them.”

Ms Fitzgerald also said Ireland’s intake of refugees under the EU relocation programme would accelerate in the weeks ahead, with 40 refugees arriving every fortnight.

The last Government committed to take in 4,000 people by the end of 2017, which includes 520 people from a previous resettlement programme. Ms Fitzgerald said she could not be sure when the 4,000 target would be met but promised it would be. She said problems were caused by the delays in establishing migrant hotspots in Greece and Italy.