Armagh-born MP ‘surprised’ by reaction to Brexit deal in North 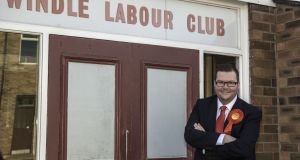 A British Labour MP from a nationalist background has told a Remain gathering in Belfast that he cannot support the draft EU-UK Brexit deal because it would be damaging to the interests of his constituents in England.

Conor McGinn, a native of south Armagh, said he believed it was still possible to get an improved deal to the withdrawal agreement negotiated between the EU and Theresa May’s government.

Mr McGinn, who is MP for St Helens in Lancashire in England, acknowledged that this was similar to the position of the DUP which has urged Ms May to go back to Brussels to strike a better deal.

Mr McGinn was “surprised by how quickly people have said this is a good deal for Northern Ireland” and suggested that some of the support for the deal was motivated by opposition to the DUP.

“I will be voting against this deal because it is bad for St Helens. Its provisions in relation to Northern Ireland were inevitable because of the unique circumstances of this place. I think there has been a quick reaction here to support the deal because of the DUP’s opposition to it,” he said in Belfast on Friday.

Mr McGinn, who spoke at an SDLP conference on Brexit in the Lyric Theatre, said his opposition to the deal did not relate to its provisions for Northern Ireland but because in his constituency “it does not offer protection for workers’ rights, for environmental protection, for consumer rights”.

“It plunges the UK into being a rule-taker in a trade relationship that is so vague and so uncertain that no one knows what it means. What we are for is a permanent customs union that would actually rule out the need for any backstop,” he said.

Mr McGinn said that ultimately if the House of Commons rejected the Brexit deal that another referendum would be held where the choices were “Theresa May’s deal, no deal, or staying in the European Union”.

He added that it was also possible that the current political upheaval could lead to a general election in the UK which would allow a “Labour government to go and get a better deal”.

Mr McGinn said his duty was “to mitigate the worst impacts” of Brexit for his constituents in St Helens.

Fine Gael Senator Neale Richmond told the conference, which was organised by Belfast South Assembly member Claire Hanna, that he would love if the option of a second referendum were possible.

“I am afraid to say it but it is a deal or no deal. The negotiations have ended and they can’t be reopened in the current circumstances,” he said.

“We have a deal. It is not a good deal, but it is the least worst option, and something that can work for Ireland, North and South. We are now at the stage where it is a binary choice,” added Mr Richmond.

Independent unionist, Senator Ian Marshall said the “uncharted waters” of Brexit was “not a good place for Northern Ireland plc”.

A former president of the Ulster Farmers’ Union he said that contrary to some of the commentary from DUP leaders that business people had read and understood the withdrawal agreement.

He respected the original referendum result but in the light of all the information now available people could make a decision at a second referendum based “not on the spin, not on the rhetoric, not on the lies, not on the untruths, but on the facts”.