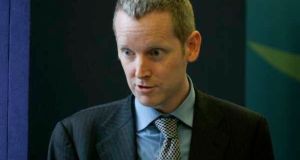 File photograph of Andrew McDowell, who is set to be nominated to the European Commission along with Mairead McGuinness.

Andrew McDowell, one of the two nominees to replace Phil Hogan as Ireland’s European Commissioner, has just finished a fixed-term stint at the European Investment Bank (EIB).

Prior to serving as vice-president of the bank from 2016 to this week, McDowell was the then taoiseach Enda Kenny’s chief economic adviser for five years.

He spearheaded government economic policy and was credited by Kenny as having played a pivotal role in guiding the State out of its international bailout and onto the path to economic recovery.

An unassuming and low-key figure, McDowell was once the engine of Fine Gael’s economic approach and came up with policies such as the ‘NewEra’ idea for creating utility companies such as Irish Water.

One senior figure in that adminsitration says McDowell was a also de facto adviser to then minister for finance Michael Noonan.

“He had ministerial status in terms of his opinion, his ideology drove a lot of what was happening,” they said. “He is quiet spoken but with the necessary level of steel. He is extremely popular, very personable, easy to get on with, and a nice streak of toughness that is always expressed politely.

“He had his arms around everything economic that happened.”

Prior to working with the government, the Smurfit business school graduate was chief economist at the Irish business development agency Forfás, and European deputy editor at the Economist Intelligence Unit.

Another source who was in a senior role during the bailout remembers him as a “sparky, up and coming sort of fellow” while at Forfás.

Alongside Labour’s Colm O’Reardon, he provided much of the economic backbone to the 2011 government, and someone who managed relations with the EU-IMF-ECB bailout troika.

“The troika saw Andrew and Colm as the duo they would need to meet and talk to,” the source said. “Andrew was much more the dominant person; Colm would be contemplating and thinking the great things Ireland could do, but Andrew would be getting on with the practical things.”

However, the same source downplayed the idea that McDowell was the effective author of Ireland’s post-bailout recovery.

McDowell is seen in Luxembourg as a compent, affable, but largely technocratic presence. He was heavily involved in the EIB’s green agenda and energy policy in his last year at the bank, which garnered a fair amount of publicity as it shifted away from financing fossil fuel projects.

His nomination to the nine-person management committee of the EIB at the time drew criticism from opposition TDs, with Kenny accused of attempting to bypass proper procedures.

This claim was rejected, with the then government insisting his appointment to the €270,000 a year role followed a contested open competition.