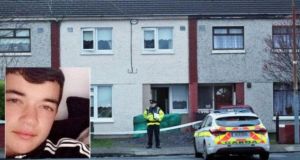 Gardaí at the scene of the fatal stabbing of Reece Cullen (inset) at Kilclare Crescent, Jobstown, Dublin in January 2017. Photograph: Colin Keegan/Collins

A teenager has been arrested on Thursday over the fatal stabbing of a 16-year-old in Dublin last year.

Reece Cullen was was stabbed a number of times in an attack at Kilclare Crescent in the Jobstown area of Tallaght on January 5th, 2017. He was taken to Tallaght Hospital and pronounced dead shortly afterwards.

Gardaí arrested a juvenile in relation to the incident at 7am who is in custody at Tallaght Garda station.